Most new PCs these days will come preinstalled with Microsoft's relatively new Office 2010 Starter.Â  This is the replacement for the frankly awful Microsoft Works and gives people a much better upgrade path to the full version of Office if they want it... or does it?

I get a regular tech mailbag of people asking for advice and support and you too can email me at mike[at]MVPs.org, I try to answer every question put to me.Â  I had an unusual one this weekend though from someone who said they'd bought a new laptop with an upgrade card for the full version of Office, but that while some apps in Office were running smoothly, others were saying they weren't legitimateÂ and wouldn't run at all.

The Office purchase card is something that PC sales people in retail outlets will try and sell you with the PC.Â  They'll tell you that Office Starter is "limited", no better than Microsoft's online apps or Google Docs.Â  They'll probably add that that the programs in it, which just include Word and Excel will "hardly do anything" and that you must upgrade if the experience of using Office on your PC is to be enjoyable in any way.

Well I've used Office Starter and I can assure you that unless you want to use more advanced features such as adding referencing and notes to documents in Word, or adding Pivot tables in Excel, it's perfectly good and for most people will do everything you need.Â  There's simply nothing wrong with Office 2010 Starter and the best part is, it's completely free.

When you run it for the first time you'll be presented with the screen here, where it will give you three options.Â  That you've already purchased a full copy of Office and want to enter your product key, that you want to go online to purchase office, or that you just want to use the basic Office 2010 Starter. The problem can occur when you choose the second option and go and buy a full copy of Office.Â  Here the Office.com website will tell you that you can download and try a free 60 day trial.Â  This user had done just that and obtained a trial product key for Office Professional.Â  After trying Office for a couple of months he went back to the computer store to purchase his activation card.Â  Looking at the different versions however he plumped for Office 2010 Home and Student as it was far cheaper than the Professional edition and, getting home, entered his new product key into his PC.

The problems then began as Word, Excel and PowerPoint worked fine on his computer, but Outlook, which had been installed with his Professional trial, couldn't.Â  It would tell him that it wasn't a legitimate copy, had expired and kept prompting him to enter a valid product key.Â  This as you can imagine caused him considerable confusion.

The problem arises because Office 2010 Starter is intended to install easily and simply without the need for downloads.Â  When you download a trial version of Office 2010 and install it on your computer it will put an Office folder in your start menu but it won't remove the link for the Starter edition.Â  This will still enable you to convert the installed copy of Starter, which is different to, but shares the same files as your trial edition into a full copy of Office.

You then end up, essentially, with two copies of Office 2010 installed simultaneously.Â  One of which is activated and called one thing in the Windows registry and another that's got a different name and that isn't activated.

So if you find yourself in this position how can you fix it?Â  The simple option is to remove the parts of Office that are installed but that won't run.Â  To do this, go into the Control Panel and open the Programs and Features option.Â  Find Office 2010 in the list and on the blue toolbar at the top of the windows click the Change button. 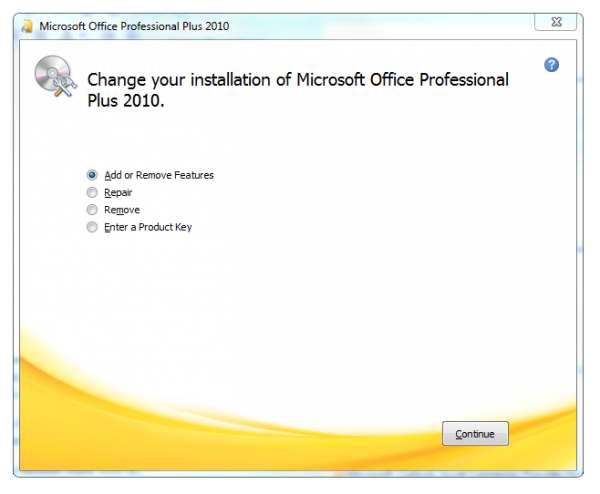 This will open a windows giving you the option to Add or Remove Features from Office and you can untick, and uninstall, all of the programs that won't run.Â  In this instance Office 2010 Home and Student only includes Word, Excel, PowerPoint and OneNote, so programs such as Outlook, Access and Publisher can be removed.

It's a frustrating and confusing position for people to be in as not only does it make them think either that the product key they bought was faulty; the software is installed after all so why won't some of it run.Â  It is also difficult for a Microsoft support representative over the phone to diagnose.

Hopefully Microsoft will rectify this problem for the next version of Office, due in early 2013.Â  Until then we'll have to continue using workarounds.