Microsoft yesterday evening released this month's security patches for their software products. The 13 security bulletins fix security related issues in Microsoft products such as the Windows operating system, Microsoft Office, the .Net Framework and Internet Explorer. Two of the security bulletins have received a critical severity rating, the highest possible rating while nine have received an important rating and two a moderate one. Please note that this is the maximum severity rating, the rating may be lower for specific products.

All in all, the bulletins address 22 vulnerabilities in Microsoft products. The two critical updates address issues in Internet Explorer and DNS Server.

Microsoft has released deployment priorities and the severity and exploitability index. (click on the images for full size) 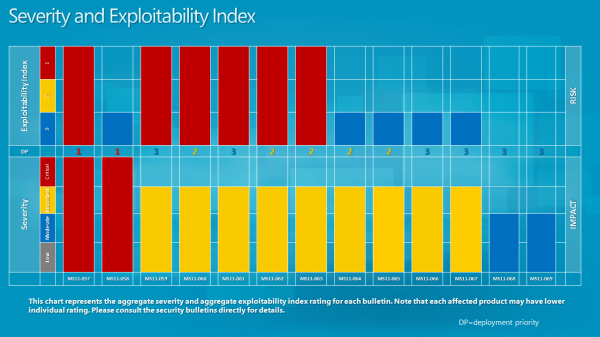 The bulletins that fix important issues.

And finally the moderate bulletins.

The updates are as usually available via Windows Update and Microsoft's Download Center (even though I would not recommend using this at this time as it is a mess).