iPad Passes 1% of all Browsing, Can Apple's Rise Ever be Halted?

The iPad's rise and rise has now surpassed 1% of all web browsing, accordingÂ to figures released by NetMarketShare.

While Internet Explorer, in its various guises, has dropped again in market share to just 53.68% of the overall market, Safari owns 7.48%. This means that Safari and Google's Chrome operating systems are the only web browsers currently gaining market share.

The reason for this is tablets and the iPad's success is significant. 1% of total web browsing may be a tiny percentage overall, with Windows still occupying 88.29% overall,Â but Android figures are difficult to determine as they're mixed in with Chrome on PCs and Macs.

In web browsing then Apple are beating, not just Microsoft, but every competitor out there. ANdroid has 0.72%, Palm currently sits at less than 0.009% percent and Blackberry devices at just 0.17%. For the iPhone and iPad to have claimed such a significant share of the overall computing market then is a huge achievement for Apple.

So how has this happened and can it be stopped? Well there are several factors that have contributed to Apple's success. The first of these, by some significant margin, is great design. If you take the current generation iPad, it is thinner and lighter than any of its competition. Apple are literally streets ahead of every other technology company on the planet, and in the position that Sony held ten to twenty years ago.

The next biggest factor is customer goodwill. Apple has a fantastic name and reputation, and with that comes an enormous volume of goodwill. This is the company's Achilles heel though as the old adage goes "the bigger they are, the harder they fall". There have been rumours of anti-trust cases for anti-competitive behaviour. Similar cases for other companies, Microsoft in particular, caused enormous resentment with loyal customers because of all the negative publicity they generate. Should an anti-trust case be brought against Apple, which is now looking like a possibility, there will be negative headlines about the company every week for, possibly a couple of years.

Even so it might be difficult to erode this much customer goodwill. Apple has ridden out the iPhone Antennagate scandal and criticisms over the profit slice they take from apps.

There is one more thing though that can potentially bring the company down, and that is the loss of Steve Jobs. It's possible that sooner or later he may have to retire, or at least take a permanent semi-retirement on health grounds. Jobs has been hugely important, and personally influential in turning around Apple's fortunes and bringing the company from the brink of bankruptcy to the position of the wealthiest technology company on the planet.

There can be little doubt that, no matter how important everyone may think Jobs is, from the Apple board and employees to shareholders and customers, he will always put his own health first as this is the most important thing. However a departure from Apple would certainly hurt the company considerably, and everyone knows it, which is why shareholders recently sought assurances he wouldn't be leaving.

No matter what happens though it's clear that there really isn't much that can harm Apple, at least not in the short-term. The rise and rise of the iPad's browsing figures are an example of the way the company is growing generally. This will get more significant as we move more towards mobile devices and "the computer in your pocket". It is here that Apple will seriously begin to do harm to Microsoft and I predict that Apple could have an overall operating system market share of 35% by 2015.

These figures are good for Apple, indeed they're positively fantastic. The rest of the world had better take note of what Apple are doing and raise their game very quickly, if they have even the remotest chance of denting them. 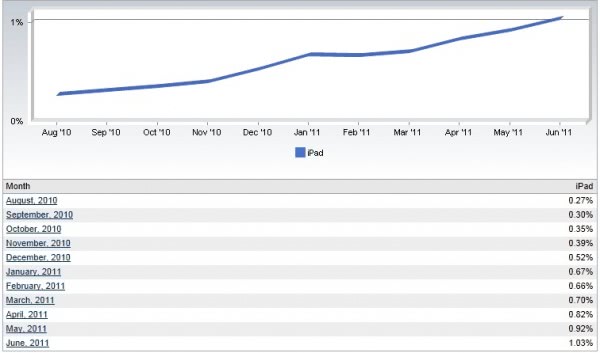 Article Name
iPad Passes 1% of all Browsing, Can Apple's Rise Ever be Halted?
Description
The iPad's rise and rise has now surpassed 1% of all web browsing, according to figures released by NetMarketShare.
Author
Mike Halsey
Advertisement