Last week I reviewed the Samsung Series 9 laptop and you can read Part 1 and Part 2 of my reviews here. Today the review unit goes back but I thought it appropriate to write a follow-up to the review as this laptop has actually had quite a profound effect on me.

Let's start correctly, I hate laptops! In fact I have always hated laptops and there are several reasons why. Firstly I've always found the typing position on them to be horrible, because no matter how large they make the wrist rest, it's always not big enough and there's too large a drop at the front of the case so that typing on them becomes uncomfortable for anything other than short messages. Then there's the proximity of the keyboard to the screen, it's just too short which can result in eyestrain and the screen itself is far too low which results in neck and back ache.

I've been using laptops on and off for a decade now and have always preferred a desktop machine. In a couple of teaching jobs prior to becoming a tech author I was given a laptop and, while I was forced to use them at work I was mercifully teaching most of the time, and on the occasions when I brought them home they just sat there, completely unused until I could take them back to work and get rid of them again.

Needless to say I have my reasons for disliking laptops. Tablets are much better, I have an ExoPC Slate and despite it being a little heavier than the iPad, I like being able to slouch around with it, having the screen a good distance from my eyes and not having to sit upright in an uncomfortable position, hunched forward, to use the thing.

Then the Samsung Series 9 appeared and everything seemed to change for me. All of a sudden I found myself reaching for this machine instead of my tablet. I even stopped thinking "I must go over and turn my desktop on" and used this instead.

So how did this new ultraportable make me fall in love with laptops? To be honest it's all down to the design and the attention to detail. The wrist rest isn't quite at desk level, but it's close enough that you would never notice it's raised upwards. In fact it's raised no further than a standard modern PC keyboard. Then there's the weight. At just 1.32Kg hereÂ is a laptop that is genuinely portable. It's not something you have to hump around in a heavy bag, all the time bemoaning its presence there. It isÂ actually a properÂ joy to carry around because you barely ever notice that it's there. Indeed it's so light that I occasionally had to check my bag to see I hadn't left it behind somewhere. 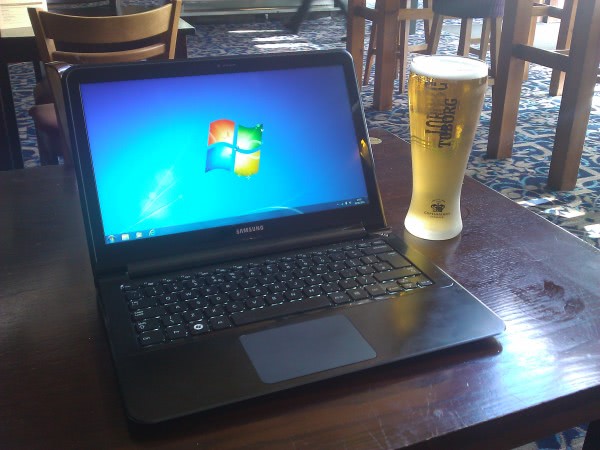 It's not just in the ergonomics and weight either that this laptop shines.Â  The screen is glorious to behold and the keyboard is one of the finest I've ever used.Â  In fact it's so good it puts my Â£100 Logitech desktop keyboard to shame.Â  It's just a very pleasant experience sitting in front of and using this machine.

You'll never get over the keyboard proximity to the screen problem, but all of a sudden I found myself not actually minding this at all.Â  We'll have more laptops like this coming soon too. Sony have a new Z Series coming out and there's a new Macbook Air due. Intel have also now announced they're planning to release 'ultrabooks' that will be only 0.8 inches thick, about the same as the Series 9 and with a similar specification too. The preponderance of these machines will mean prices will drop and, before you're able to say "I'm not carrying that thing home again" they'll be available for less than $1000. In fact Intel anticipates selling ultrabooks for as little as $600 in the coming years.

For now, while it's pricey, the Samsung Series 9 is an absolute winner. It's made me fall in love with laptops for the first time and proven to me they can really be a joy to use. If you're of the same mind as I am and have the spare cash to buy one, then it's a solid 9/10 for the Series 9 from me.

Previous Post: « Samsung Series 9 Ultraportable Reviewâ€¦ Part 2
Next Post: « Why can we still not print from Smartphones and Tablets?