Why Twitter Is So Popular With the Rich and Famous - gHacks Tech News
ghacks.net

Why Twitter Is So Popular With the Rich and Famous

A few years ago, the social networking site Twitter was virtually unheard of. However, it then started becoming very popular with the rich and famous, prompting a massive surge in users from the general population. Or was it the other way round? What is it that makes this website so popular with the majority of those in the public eye? Well, there are several things that make this the case.

Firstly, there is the ability to get their side of the story out there before the papers publish stories that famous people do not want to be believed. For example, many celebrities have taken to Twitter the night before a big story is due to be published to tell their fans that what they are going to be reading is not true.

Whether they are telling the truth or not is not important, it is the fact that they are able to reach their entire fan base within a matter of seconds. This is one of the reasons why Twitter is a really useful tool for those in the public eye. Take a look at the celebrity boxer Amir Khan below doing just that!

Another reason that many celebrities have commented on is that they are able to have more of a connection with their fans. Of course, there are many other ways to do this, but Twitter offers more of a personal approach. Many people use this site to talk directly to their fans on a one to one basis; something that just wasn’t possible with other sites that claim to offer the same thing. Not only is this popular with the famous users, but also their fans.

Publicity is a very important part of being famous, and Twitter is one sure fire way to gain maximum exposure. The Twitter platform allows the famous users to get information to fans in an efficient manner. It is also a fantastic way of promoting events, new releases, or even interviews that are available online. Once a piece of information is published on Twitter it is then available for millions of people to see. Of course, this is a big part of the popularity of this website with the rich and famous.

Twitter offers a very fast form of communication, and for those in the public eye, it seems to be a very easy way of communicating with their other famous friends. The downside to this is that the conversation is available for everyone to see, but to many celebrities, this is an advantage. As you can see, there are a lot of different things that make this social networking tool a massive hit with the rich and famous. Everyday more and more famous people are joining up and sharing information with the world, something that seems to be highly advantageous to them.

Let’s take a look! We’ll use President Obama as an example. 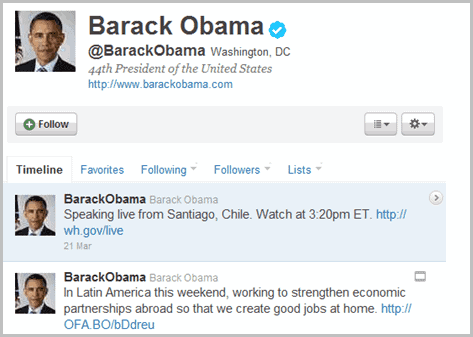 So, you know how to follow a celebrity, but how do you actually find them in the first place? Well, the easiest way of doing this is by using the built in search function on Twitter as shown below. Again, we’ll use President Obama as our example.

As you can see, by simply entering ‘Obama’ into the search function at the top of the page you can bring up a page of result. By clicking on the ‘People’ tab you will see that the Twitter page for President Obama is at the top of the page. You can then click on the page and follow the President. It really is as simple as that. If a celebrity has a Twitter page then there is no reason why you cannot follow them.

If you are new to Twitter then you might be wondering about celebrities that you can follow. Some of the biggest famous names are active on Twitter and waiting for you to follow them. Let’s have a look at some of the most popular famous people that are currently Tweeting.

View all posts by Zoe Bishop →