Computers connecting to the Internet do so with an IP address which is provided dynamically or statically by the Internet Service Provider (ISP). That IP address can be used by websites and services to identify a user's location in the world, which in turn means that they can find out about the user's ISP as well. Users who prefer to stay anonymous on the Internet have a few options, from basic web proxy servers which do that for a single website in a browsing session to complete solutions like Virtual Private Networks (VPN).

The advantages of using a VPN are manifold, among them that it sits like a proxy between the computer of the user and all Internet activities. It does not matter if the user browses the web, plays a game on Steam, downloads files via P2P or watches streaming movies. The VPN will always act as the proxy, something that web proxies cannot do.

Another advantage is the fact that it makes the Internet connection more secure. VPN connections are encrypted by design, which means that users in the same network, say a public network at school, dorm or work, will not be able to eavesdrop on the traffic. Firesheep? Not a problem for VPN users.

Invisible Browsing VPN (IBVPN) offers free and paid accounts. The company gives away 30 free accounts per week, offers a 2-hour trial account and several paid options which range from $4.95 to $7.95 per month. The paid accounts differ only in the countries the user can connect to. The two $4.95 accounts offer either VPN access in the United States and Canada, or the United Kingdom and Ireland. The premium VPN service contains the four and in addition network access in Germany, France and the Netherlands. 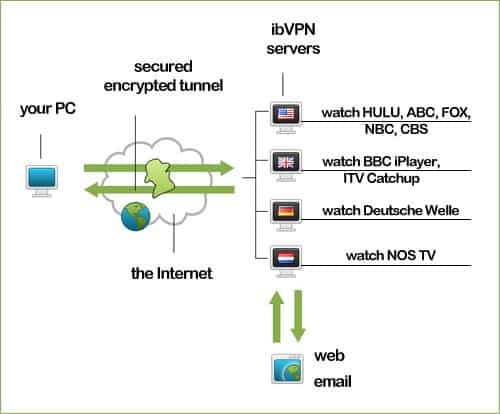 So what can the average web surfer do with a VPN?

Now that we have established what you can do with a VPN, we should take a closer look at how it is setup. IBVPN offers easy configuration guides on their website for Windows, Linux and Mac users. Windows users can even download a small client which is dead easy to use. Just start the portable application and enter your username, password and a server that you want to connect to. A list of servers is provided in the welcome email and in the account section over at the Invisible Browsing VPN site. A click on Connect establishes the connection to the selected VPN which is visualized by the Connected status message in the program application. A click on disconnect breaks the connection again.

Advanced users, and users with Linux or Mac, can follow the guides on the website to configure the VPN manually.

Setup is really easy on Windows, especially if the vpn client is being used. Everyone can do that without having to create a new connection manually. That's a big plus for the service as most of the VPN services do not provide access to a client software. The connection speed is good, both Hulu and Pandora streamed without interruptions, BBC was a bit slow in the beginning but it ran fine after a bit of buffering. Speeds are excellent and tests at speedtest.net have shown connections speeds of 5+ Mbit down and 1.5 Mbit up.