Apple personal computer sells for $210,000 (and it's not even a new one) - gHacks Tech News
ghacks.net

Okay, so I might poke fun at the price Apple charges for its computers, but this one is truly antique.  One of the very first Apple personal computers, first sold as a run of only 200 in 1976, has just sold at auction for £133,250 ($210,000) complete with signed letters of authenticity from company founders Steve Jobs and Steve Wozinak (the latter of who was present at the auction).

Originally sold for $666.66 it was bought at auction house Christie's by Italian businessman and private collector Marco Bogline according to the BBC.

The Apple I as it was known would be restored to working condition by its new owner however it is lacking a keyboard, power supply and display.  It was the only personal computer at the time to come with a fully assembled motherboard. 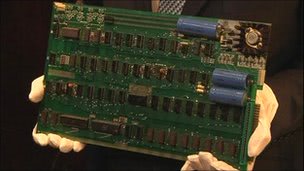 To put into perspective just what this computer is capable of it contains a 1MHz processor and 4K of RAM (Expandable to up to 48K).  It's graphics capability extended to 40 x 24 characters on screen (with hardware-accelerated scrolling) and Apple's iPad is at least 1,000 times as powerful.

That said this is a unique piece of computing history and is clearly well worth the money paid for it.  As a society we need to preserve our computing heritage as it's all too easy to forget just how recently things all began.  This computer, while an antique is lets not forget, only 33 years old!