ZoneAlarm Global Virus Alert About ZeuS.Zbot.aoaq: Scareware At Its Best

Scareware can be described as software that attempts to "scare" the user into making a purchase. A common example are fake antivirus solutions which may display information about alleged threats found on the computer when there are none in fact.

The information that a computer virus was found will scare users into buying additional protection to secure their system and remove the alleged threats from it.

Nico just notified me that the popular security company ZoneAlarm has started to use scareware tactics to sell more of their products.

Your ZoneAlarm Free Firewall provides basic protection, but this new threat requires additional security". Options are to see the threat details or get protection. 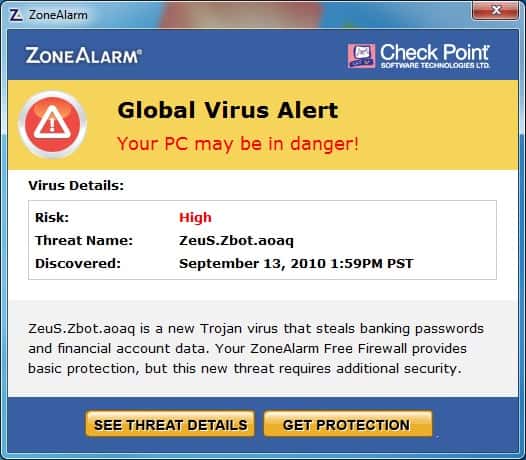 The problem lies in the wording. This is not actually a threat that was found on the user's computer. It is merely a notification of the threat. But ZoneAlarm makes it look like the user's PC is infected and that there is need for action. And the action is to purchase ZoneAlarm products.

Users who read the notification carefully may notice that it is a notification, and not an infection that has been found on the system.

Is that something that the firewall usually detects? I have never used their firewall but it is unlikely that a firewall would display those messages.

The real problem here is that the alert looks like an infection was detected on the PC. What makes matters worse is that the notification does not inform users that their PC is safe right now and that users don't need to worry about that or purchase better antivirus software to detect and remove the threat.

No, it only displays an option to see the threat details or to buy a product from ZoneAlarm. That's scareware tactics at its best.

ZoneAlarm Firewall Free users who get the global virus alert should close the notification immediately. If they have an up to date antivirus software on their system it is all they need to do. If they do not have one, they should consider installing AVG 9 or Microsoft Security Essentials, both completely free and very good at detecting those kind of things.

Martin Brinkmann is a journalist from Germany who founded Ghacks Technology News Back in 2005. He is passionate about all things tech and knows the Internet and computers like the back of his hand. You can follow Martin on Facebook or Twitter
View all posts by Martin Brinkmann →
Previous Post: « Microsoft Releases September Security Patches
Next Post: New German, Swiss Identification Cards Not As Secure As Claimed »