Video thumbnails offer a limited preview of a video before it is played. This can be helpful for getting a first impression and may sometimes even make the viewer skip the video based on the preview.

Most video sites on the Internet display at least one thumbnail for each video they are hosting so that you may get a first impression of them right away without having to load the videos first for that.

Videos at a glance is a Chrome extension that offers video previews on several popular video hosting and posting sites such as YouTube, Twitter, Bing, Google Search, Digg and Reddit.

The extension adds a thumbnail stripe to pages where videos are posted. For YouTube that's for instance the search results pages but also individual video pages. 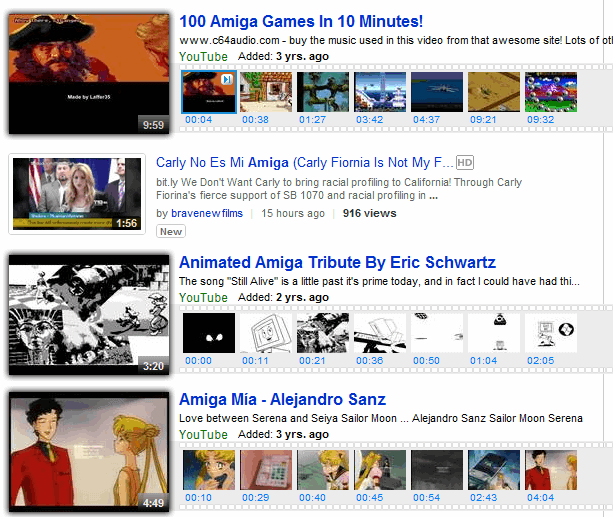 Thumbnails are displayed with the time they have been captured. Hovering over a thumbnail changes the bigger video image so that a larger sized version of the preview image is shown.

A click on a thumbnail loads the video and plays it from that time on, which makes it possible to skip ahead.

The second feature offered by Videos at a glance is the option to display related videos in a sidebar in the browser. The results that are displayed are different from the video results displayed at YouTube, which means it may sometimes make sense to use the extension's option in addition to the related videos that may be displayed on a video page.

Probably the most interesting aspect of the extension is the ability to directly jump to specific positions in the video based on the preview thumbnails.

Chrome users who view a lot if videos may find the extension very helpful. Videos at a glance causes some display problems on some supported sites, nothing major but still visible.

Update: The videos at a glance extension has been discontinued. It is no longer available at the official Chrome Web Store. The website of the developer, Video Surf is still available.

Update 2: Video Surf is no longer available as well. It redirects to Bing Search which is why we have removed the link to it from this article as well.

If you want to preview videos, you may find the YouTube Video Preview for Chrome useful in this regard. While it won't display thumbnail stills of the video, it allows you to preview it without leaving the page.

Martin Brinkmann is a journalist from Germany who founded Ghacks Technology News Back in 2005. He is passionate about all things tech and knows the Internet and computers like the back of his hand. You can follow Martin on Facebook or Twitter
View all posts by Martin Brinkmann →
Previous Post: « Chromium Gets GPU Acceleration, Chrome Next
Next Post: Tab Sugar, Like Firefox Panorama, But For Chrome »