One aspect of Search Engine Optimization (SEO) is the monitoring of search results in popular search engines. This can be done manually with some preparation, or automatically with search engine tracking software.

While SEO's usually do not have a problem assessing the position of a site in a standard ten results search engine results page, they might have problems if the number of search results has been increased.

Since you can display more than ten results per page, which can speed up certain processes as you don't need to click on the next buttons to load additional results, it is possible to have a list of up to 100 results on a single page on Google.

The only available option is counting the results manually which can take some time depending on the number of results per page.

The Google Chrome and Firefox add-on Google Ordered Lists has primarily been designed for search engine optimizers who want to assess a website's ranking on first glance.

The extensions are compatible with all supported result page sizes, from the standard ten results to the maximum of one hundred results per page.

Ordered lists are shown as decimal numbers by default. This can be changed in the extension's options, so that Roman numerals are displayed instead.

Google Ordered Lists can be helpful for users who track search engine rankings manually in Google, especially those who display more than ten results per page. It may also be interesting for users who want some orientation, again more so if more than 10 entries are displayed in Google.

What may be interesting however is that the extension highlights the first organic result on Google so that it may be easier to find it and less likely to identify advertisement as a result. 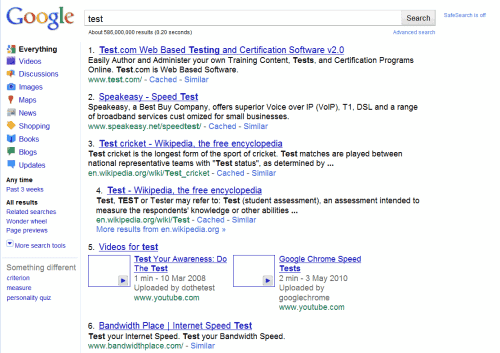 Martin Brinkmann is a journalist from Germany who founded Ghacks Technology News Back in 2005. He is passionate about all things tech and knows the Internet and computers like the back of his hand. You can follow Martin on Facebook or Twitter
View all posts by Martin Brinkmann →
Previous Post: « Youtube Ups Video Limit to 15 Minutes, So What?
Next Post: Google Multi Account Logins, What You Need To Know »