Getting started with Microsoft Office 2010 Guide

The book's core audience is mainly IT administrators, help desk, deployment staff and consultants even though it contains valuable information for end users as well.

Update: Microsoft pulled the document from its own server in the meantime. We have uploaded copies to our own download server for archiving purposes. Note that we don't support the documents in any way. You can download them with a click on the following link: Office 2010 Getting Started

Getting started with Microsoft Office 2010

The Office 2010 ebook has a size of 258 pages that are divided into various chapters of interest, among them the following chapters:

Some chapters of the book contain information that are not available in all Office 2010 suites; users who have purchased Office Home and Business 2010 for instance do not have access to apps like Publisher or Access.

Most chapters contain what's new, what's changed, what's removed and migration information which can be used to quickly compare the new Office 2010 with previous Office releases.

Getting started with Microsoft Office 2010 is available for free at the Microsoft Download Center. The document is provided in doc format.

Office 2010 users can also access relevant information about Office 2010 on the official Office website. There they find help sections for every Office module available including free guides and training opportunities.

Do you use Office 2010? Let us know what you think of it in the comments. 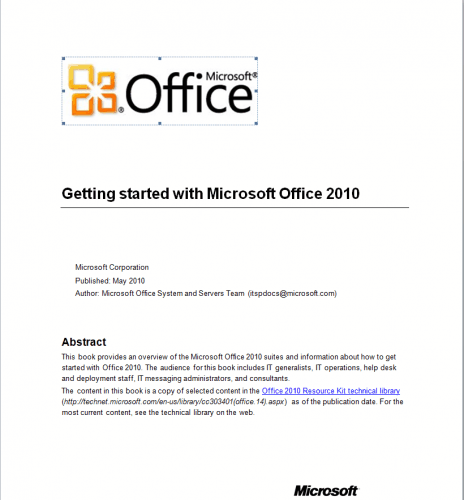 Previous Post: « Windows XP Help attacks on the rise
Next Post: « To Prove A Point, Microsoft Creates A Bank For A Day