Battlefield Bad Company 2 is a very popular computer game at the moment topping lots of sales charts and game charts. Dice and Electronic Arts had to cope with many initial usability and server problems in the beginning, something that does not seem to have affected the game's popularity by much.

PC users who want to edit the game's settings have to edit a configuration file for many advanced parameters. It is for instance not possible to change the DirectX version of the game in the game interface.

Bc2 Ai1 is a free software program for 32-bit and 64-bit editions of the Windows operating system that provides direct access to many game configuration settings that would otherwise be only accessible in those configuration files. 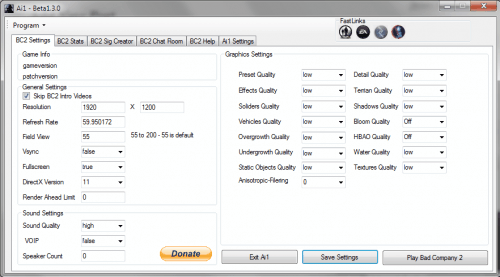 The program displays a configuration wizard on first start that tries to detect the Bad Company 2 directory, configuration directory and a TeamSpeak directory automatically. It is possible to edit the paths if the locations are not identified correctly which is for instance the case if a 64-bit edition of Windows is used.

Configuration options are then displayed in the default tab that the program opens with. All can be directly edited in the program window. A click on Save Settings save the new configuration information with the additional option to launch Bad Company 2 directly from within the configuration tool.

Bc2 Ai1 includes a stats checker and signature creator as well which can be helpful for some users.

BC2 Ai1 can be downloaded directly from the developer's homepage