The Google Chrome development team works constantly on three different versions of the web browser; A stable build, a beta build and the developer build (Update: add to that the Canary build which is even more cutting edge than the developer channel).

The beta build offers a good compromise between stability and speed. The latest Chrome beta update to version 5 promises a 30% to 35% speed improvement over the previous beta channel release which in itself is already faster than the stable release of the browser.

This alone might convince users who want their browser to be speedier to make the switch to the beta channel - or the even faster dev channel. But the latest Chrome update available for Windows, Linux and Macintosh systems delivers more than just speed.

The developers have added a handful of features to the beta release that will be useful to all users of the browser. Remember, features wander from Canary to Dev to Beta to Stable in that order which means that those features will land in stable versions of Chrome eventually.

Bookmark sync for one has been extended so that browser preferences, themes, homepage and startup settings can now be synced using the feature. 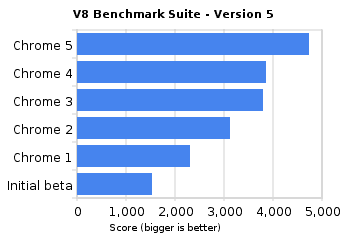 This beta version of the browser includes the first native implementation of Adobe's Flash Player which offers several advantages over the standalone version including instant updates without having to take care of that on the system anymore.

Security conscious users who prefer to work without Flash can disable it in the browser's options, and it is even possible to use the standalone version if that is desired.

The two other features that have been added are new HTML5 features that include Geolocation, drag and drop, web sockets or app cache, and the ability to install extension in the browser's incognito mode.