Common options to overcome those filters is to use web proxies or caches. Internet censorship in China has advanced over the years and many solutions that worked back then no longer work. 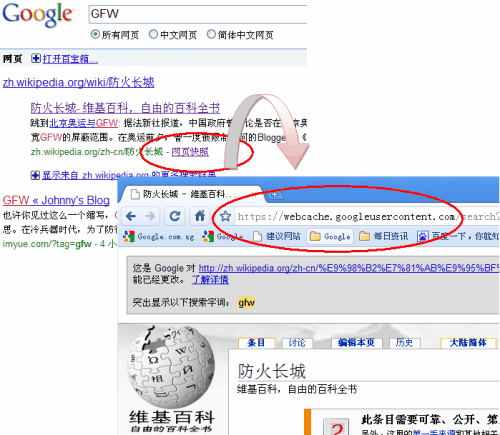 A search on Google not only displays the link to the websites that are linked in the search results but also to cache results which are stored copies of those websites on Google servers.

The standard link to those cache entries is a normal http link which seems to be blocked in China. The https version, which one can test by simply adding the s to the url, does not seem to be blocked currently. The extension for Chrome basically rewrites all Google Cache links so that they automatically point to the https version.

It is likely that those links will be added to the filter eventually though. It should also be noted that this only works for pages that appear in the search engine results.

Https Google Webcache can be downloaded from the Google Chrome Extension gallery.

Update: Google has recently changed the interface of their search engine. As a result, cached links have been moved from being directly displayed on the page to another location.

You now need to move the mouse over the result that you want to access a cached version from, click on the arrows that appear, and then on the right on the Cached link that appears above the preview screenshot of the web page.