Prevent Restore is a program for Microsoft Windows devices that provides you with the means to delete files permanently so that they cannot be restored anymore.

Making sure that files cannot be recovered after they have been deleted can be essential in several situations.

It is for instance important to prevent data restoration before giving the storage device away, or selling it to third parties. The same is true if you sell the PC, or give it to someone else.

It is a privacy issue and some computer users do schedule disk wiping tasks regularly to make sure that deleted files cannot be recovered anymore; this sometimes regardless of whether they keep using the storage device, or plan to give it away or archive it. 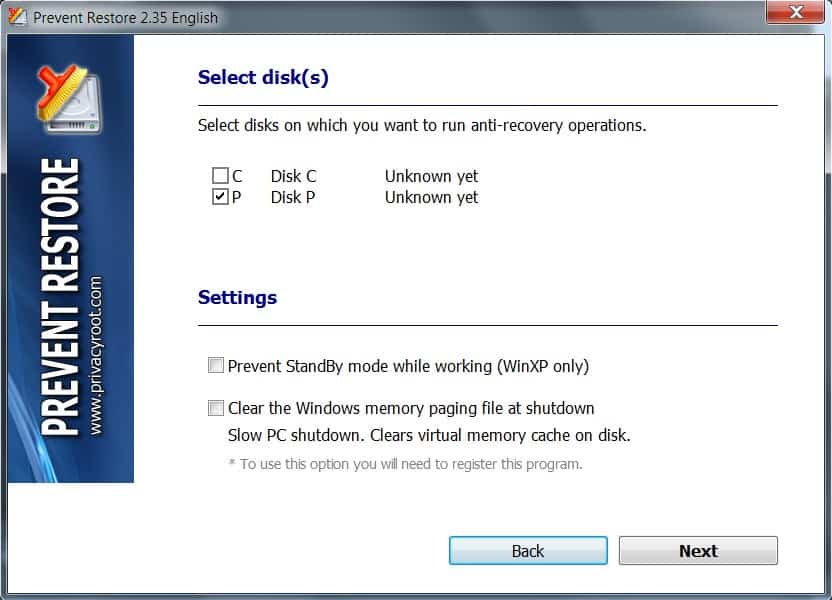 Prevent Restore is an easy to use software that can be used to wipe the free space of a hard drive. It is in this regard an alternative to the popular free program Eraser which can be configured to do the same.

Free storage space means any space that current files don't occupy. The main idea is to delete file traces and files that were deleted in the past on the device so that they cannot be restored anymore.

Prevent Restore displays a list of hard drives on startup which can be selected for the disk wipe process.

Only the drive letters are shown in that menu which may make the identification more complicated than necessary.

Users should also make sure that they do not (accidentally) select a SSD for the process as regular disk wiping won't work on those devices.

A total of eight different algorithms are available of which only one is provided to users who have not registered the software. Only the "replace with spaces" option is available to those users. Registered users who pay $14.95 for an upgrade to the program's Pro version can also select random characters or digits, Peter Gutmann algorithm or the Department of Defense algorithm.

The program runs the task afterwards. The time it takes to complete it depends largely on the hard drive, the free space, and the selected algorithm.

The most recent version of Prevent Restore Pro supports the following features on top of all that's been mentioned above:

Prevent Restore is an alternative to Eraser, especially for users who have issues using the program. Eraser is on the other hand the disk wipe program that is offering better functionality and features. There is no need to use Prevent Restore if Eraser is working properly, unless you want to purchase the pro version for support.