Flickr is one of the most popular photo hosting services on the Internet with thousands of photos uploaded every minute. Some companies, organizations and networks have decided to block Flickr due to its popularity to prevent their employees from accessing Flickr during work time.

There are basically two options to access Flickr if it has been blocked in the computer network or on the local computer system: The first option is to use a proxy server, the second to use an alternate url.

Proxies tend to get banned fast by network administrators who just need to scan the traffic logs that contain connections made by all users to find and ban proxy servers used by company employees.

More interesting than using proxy servers - which can also pose a security risk if the user wants to log in to Flickr - is the use of an alternate url that provides full Flickr functionality.

Update: The url is not working anymore unfortunately. The only way to access Flickr while you are connected to a network where the site is blocked is to use a proxy server instead. One of the easiest options in this regard is to use a built-in proxy. You can use Opera's Off-Road mode for example, or Google's compression proxy. End

All that needs to be done is to replace www.flickr.com with www.flickr.mud.yahoo.com. The latter will open the same page that the default url would open and users can perform all activities on Flickr normally. 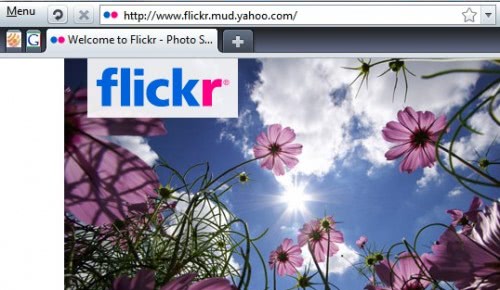 The alternate url might be blocked in some networks as well depending on the rules used to block the photo hosting sites. It will not work if the word "flickr" has been blocked in urls or page titles but it will work fine if the admins have only blocked partial urls like *.flickr.com.