Quix is a customizable command driven bookmarklet that can be used in most of today's web browsers including Microsoft's Internet Explorer, Mozilla's Firefox, Opera, Google Chrome or Safari.

It is basically a mixture of Mozilla's Ubiquity and an extended search add-on like Cybersearch for Firefox in the form of a bookmarklet.

The bookmarklet needs to be dragged and dropped into a toolbar of the web browser and a click on it will open a prompt that accepts commands.

A good start is to use the help command to open a page in the browser that displays pre-configured commands that can be used in Quix. 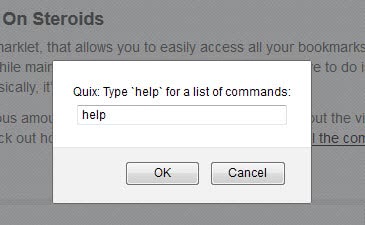 This ranges from basic commands like performing searches in various search engines and sites like Google, Wikipedia, IMDB or Flickr, social commands that bookmark the page at Delicious, share the page at Facebook or tweet the current page to Twitter, Seo related commands that perform specific searches that are relevant to search engine optimizers, url shortening commands or webmaster related commands like validating a website, registering a domain name or displaying a ruler on the page to measure elements.

These options alone would be very nice but Quix has another feature that makes it even more useful: The ability to extend the command set. The syntax that can be used to extend Quix is described on the Extend Quix page. Each Quix command consists of three blocks, the command, the executable and the description. The command is basically the command that is run by the user in the Quix prompt. The executable is either

The available replacement tokens are:

Quix offers several benefits over running a plugin or add-on that offers a similar functionality. It is browser independent, does not take up memory or processing power when it is not running and will not cause stability, performance or security issues that add-ons or plugins can cause. Quix is available on the the project's website.

Martin Brinkmann is a journalist from Germany who founded Ghacks Technology News Back in 2005. He is passionate about all things tech and knows the Internet and computers like the back of his hand. You can follow Martin on Facebook or Twitter
View all posts by Martin Brinkmann →
Previous Post: « Astrill Is A Fast And Affordable VPN
Next Post: Simple yet powerful task management with Todoist »