Digital photo frames can displays images that are either stored locally, transferred via a wireless connection or directly from the Internet.

Flickr2Frame has been designed for users who need to connect their digital photo frame to a computer system to update the photos that are displayed when it is running.

It can pull photos from a Flickr account and copy them to the digital photo frame, or memory card.

It works with direct connections of the photo frame but also memory cards and other storage devices that might be used to update the photo storage on the digital photo frame.

The program itself is easy to use but not so easy to setup as it requires quite a bit of configuration before it can be used. The software comes with a configuration utility that needs to be executed during the first connection. 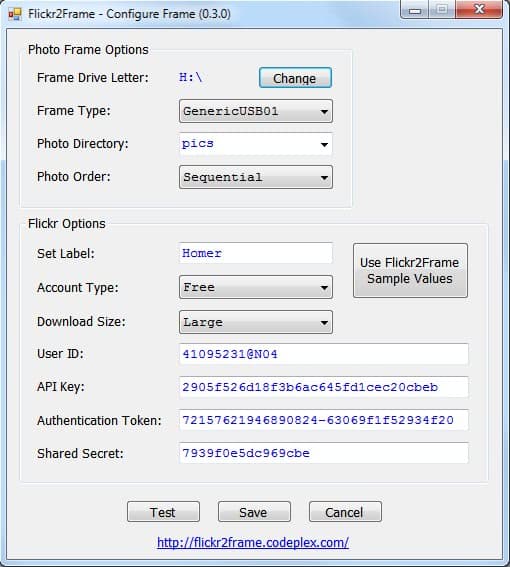 Probably the most difficulty part of the configuration is the selection of the frame type and setting the api key, authentication token and shared secret under Flickr Options. The developer of Flickr2Frame has published a tutorial that walks the user through the process of getting those information and entering them into the software.

The main software program will then download photos under the selected label and user account from Flickr to the designated storage space on the device. if the digital photo frame is connected directly it will automatically move them in the right directory (erasing all files in that directory first) so that they can be displayed afterwards. An option to keep the photos that are already in the directory would be really nice to avoid losing photos this way.

Flickr2Frame is available at the Codeplex website. It is compatible with 32-bit and 64-bit editions of Windows XP, Windows Vista and Windows 7 and requires the Microsoft .net Framework 2.0 or higher to be installed on the computer system it is being executed on.

Update: The program has not been updated since 2010 which suggests that it won't work properly anymore as it has not received an update in nearly six years, and since Flickr has changed quite a bit in recent time.

It may be easier to download images directly from Flickr, or keep them stored on a local device all the time so that it is easier to update the photo frame with new images.