Working with multiple open documents in Microsoft Office applications like Microsoft Word or Microsoft Excel is not as comfortable as it can be. The documents are all placed in the same interface with no straightforward way to switch between documents easily (the keyboard shortcut Alt Number will do the trick but one has to know the number of documents to use it effectively and it is limited to a maximum of nine documents).

Office Tabs brings a possible solution in form of a tabbed browsing interface for Microsoft Office. The software program supports Microsoft Word, Excel and Powerpoint and will display a toolbar beneath the ribbon interface in Office 2007 that is displaying all open documents. A double-click will quickly open a new document and a click on existing tabs will display that document in the foreground. 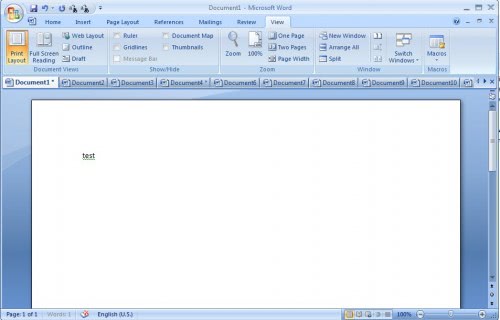 The tabbed interfaces for the three Microsoft Office products can be configured individually. This includes disabling the tabbed interface in an Office module, configuring the layout (colors, appearance and position) and shortcuts.

Custom Tabs is compatible with Microsoft Office 2003 and 2008 on Windows XP, Windows Vista and Windows 7.

Update: The program has been moved to its own domain where it can be downloaded free of charge. The program is free for personal use and does not come with any time or feature limitations.Â  Note that it is fully compatible with Office 2003, 2007 and 2010. There is also a version for Office 2013 that the developer of the program makes available.

Several new and exciting features have been integrated into the Office Tabs application by its author in recent time. It is now for instance possible to save all open documents with a single click. That's great if you have been working on multiple documents and want to save them all at once.

You can also move tabs around via drag and drop, lots of shortcuts to speed up your work, and options to hide or show the tab bar.