Web users have quite a few possibilities to access websites that have been deleted or are temporarily unavailable for some time. Possibilities include using Google Cache, the Web Archive or other web caches that mirror websites. Web caches are great for accessing single pages of a website but not comfortable when multiple pages need to be accessed. It can also happen that webmasters have lost their website in a server crash and need to restore the pages from Internet caches.

Warrick is a Perl script that tries to restore websites from various Internet sources including Archive.org and the three popular search engines Google, Yahoo and Bing. Installation is a bit more complex than running an executable but still doable even for inexperienced users. The computer program is provided as a version for the Windows and Linux / Unix operating system. Windows users need to install a Perl interpreter such as Active Perl before they can run the script from the command line. 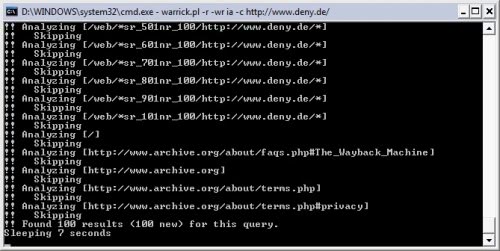 The developers have created a step by step guide for Windows users on how to install and use the script on the operating system. The Warrick website contains examples on how to use the script to restore single pages and entire web projects.

The command "warrick.pl -r -wr ia -c http://yourwebsite.com/" will reconstruct all pages of the website that are stored in at least one of the online sources used in the recovery process.

Warrick appears to have been updated regularly which is obviously a good thing considering that search engines such as Google or Bing have made changes to their engines in recent time. I highly suggest you start with the about Warrick section on the website to get a feeling for the program and understand how to install and run it on your operating system.