Update: The browser add-on was pulled from Mozilla's Add-on repository. There is no comparable add-on available at this point in time.

The add-on can be downloaded from the official Mozilla website. It offers an Get Add-ons button in its interface that will do some magic in the background to display Firefox add-on suggestions to you that complement what you have already installed in the browser.

The description offered by the developer of the add-on is a little bit vague but it seems that they suggest add-ons by evaluating add-ons that are used by other users in conjunction with add-ons that are already installed on the computer system. It has to be noted that the add-on will submit information about installed add-ons to the developer's web server, and that there is nothing that you can do about that in the UI. 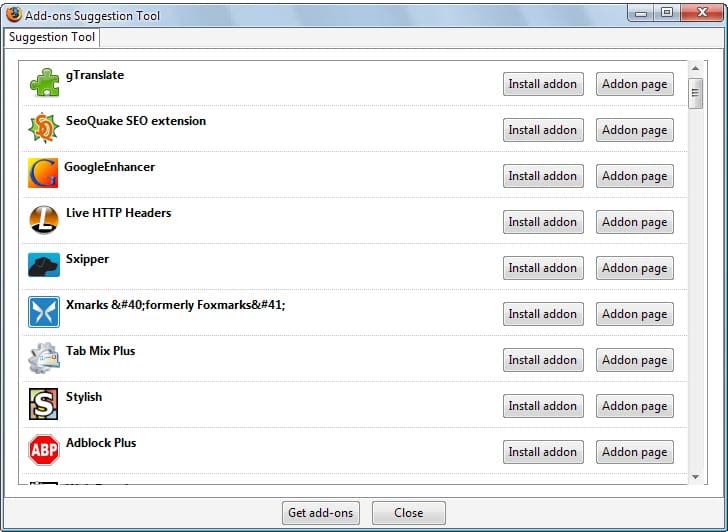 The suggested Firefox add-ons are displayed in a list that resembles the Firefox add-on menu with the difference that only the name of the extension is listed in it. This is one of the weaknesses of this Firefox add-on as you don't necessarily know from the name what functionality an add-on offers. Adding descriptions would make this add-on more useful than it is right now.

The installation can be completed on that page then as well which makes the install button in the add-on's interface more often than not redundant.

The Firefox add-on can become very popular if the developers add add-on descriptions to the interface.

Update: The add-on has not been updated since 2009, which may indicate compatibility issues with more recent versions of the Firefox web browser. It is likely that the add-on won't work anymore in the latest versions.

The Get Add-ons page on about:addons features a recommended section as well. While it does not seem to take installed add-ons into account, it appears to be closest in terms of functionality to this extension.