The massive increase in data collection throughout the world has not led to responsible data storage laws. That is an imbalance that becomes obvious especially in one country in these days.

The UK is amassing heaps of data about the country's citizens for the country's fight against terrorism (and other causes) but is failing miserably over and over again when it comes to securing the data that it collects.

Think of past stories like top secret information found in a digital camera that got sold for a few pounds on eBay, or the discovery of an USB stick outside a pub containing information about 12 million British citizens.

This time it was mere paper that was responsible for a data leak. Most users would think that pre-computer age politicians would know how to handle secure information on paper properly.

This is apparently not the case either as police chief Bob Quick managed to carry a document marked secret in public which immediately caught the attention of by-standing photographers. 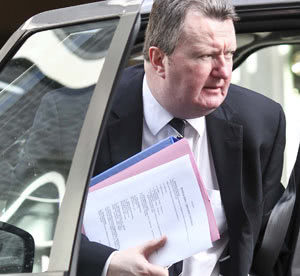 The document, which can be viewed on the Guardian's website contains information about an anti-terrorist raid. The details were extensive including names, addresses and command structures. The raid had to be conducted in bright daylight because of the security leak.

It looks as if the police chief read the file during the car ride and forgot to put it back in the ring binder afterwards. While this can happen, it is certainly something that should never happen with cameras being as good as they are.

As Dante, who send me the link to the story points out: "It's not just electronic security that counts. It'â€™s also what happens when a user prints out the data."