If you like to listen to music in iTunes you might have noticed that iTunes does not provide keyboard shortcuts to control the playback when iTunes is running in the background. Other music players like Winamp or AIMP provide that feature which might be interesting for many users.

The developer of iTunes Media Keys released a public alpha version of his software. The software adds global shortcuts which can be used to control the playback in iTunes.

To be more precise it adds four shortcuts that can be used to play / pause, stop and to switch to the next and previous track. The default shortcuts are assigned to [Shift UP, DOWN, RIGHT or LEFT]. It did also recognize a Logitech media keyboard and changed the shortcuts automatically to the media keys instead. 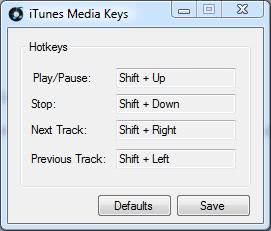 The developer plans to add additional features to his software program like being able to rate songs and better hotkey integration.

Update: iTunes Media Keys has not been updated since 2009, and while it may still work fine with current versions of the iTunes software, you may run into issues eventually due to the lack of updates. The project appears abandoned by its developer. Note that the program requires the Microsoft .Net Framework 3.5.

A recent alternative is iTunes Hotkey, another software for Windows that allows you to create global hotkeys for iTunes as well. It basically enables you to select hotkeys for play, pause, stop, next and previous track using all available keys on the keyboard. Just run the program and select the shortcuts using the tabbed interface.

iTunes Hotkey is a free portable program for the Windows operating system. It is compatible with all recent 32-bit and 64-bit versions of Windows.