T-mobile setup a flash based emulator of their upcoming Android phone T-Mobile G1 to visualize some of the functionality of the of the first Android phone. The emulator has its shortcomings like displaying the Android phone in the wrong size and some functionality is severely limited, but it may provide users with a quick glance of what they can expect from the phone when it launches. I highly suggest you test it in store just to make sure it is the right phone for you before you make a buying decision.

Taking those limitations aside the Android phone emulator does provide a good overview of some of the features that the Android phone will offer. It is possible to get a first impression of the Google browser, Google maps and other features like receiving calls, sms or mms. There is no real interaction with the emulator though. It is for instance not possible to use it to open any websites or actually call someone.

The flash based website of the Android phone emulator contains two additional sections that are important if you want to get an impression of the phone's dimensions because they seem to display the phone in the correct size. 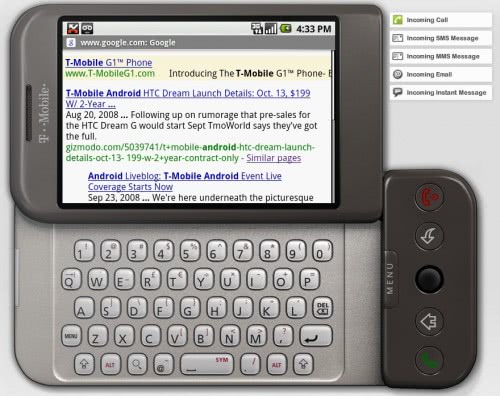 It would have been better if T-Mobile would have used the correct Android phone dimensions for the emulator as well so that potential buyers and interested users would get a real feeling for the phone's dimensions which is especially important for tasks like web surfing, emails and the phone's qwerty keyboard. Basically any text-based operation benefits from a larger screen which may confuse users if they find out later that the phone's dimension are not as large as the emulator suggested they would be.

Update: The emulator is still up and running. Remember that you need Flash installed on your computer to run it in your web browser The phone is not the newest anymore, but the emulator can still provide you with a nice impression of how Android phones work.