Universal Netboot Installer (UNetbootin) is a portable tool for Windows and Linux that you use to download and install various Linux distributions to a system partition or USB drive without the need to burn the distribution first.

It supports dual-boot installs or single installs that replace the master boot record (MBR), so keep that in mind if you are running another operating system on the computer.

The process itself was designed with ease of use in mind. You begin by selecting a distribution and version from the top pull down menu - roughly 20 Linux Distributions are available currently ranging from Damn Small Linux to Open Suse, Linux Mint and Ubuntu - with versions being displayed next to the selected distribution in another menu.

The full list of supported distributions is available on the project website so check it out if you want to know if your favorite Linux distribution is supported. 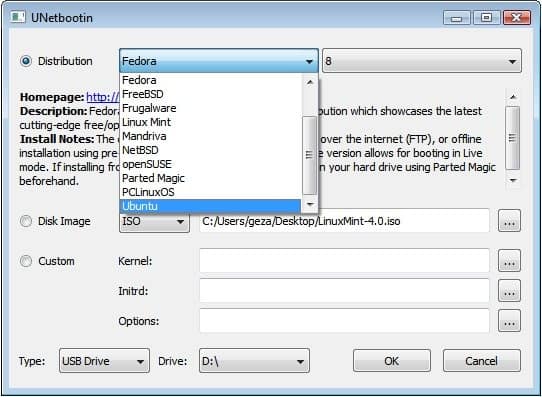 A homepage link and a short description of the selected Linux operating system is displayed below the selection which provides basic information about it.

This can be quite useful for users who never used Linux before and don't really know which distribution to choose. If that is the case, it is best to click on the homepage link to look up additional information about interesting sounding distributions to make an educated decision in the end.

Users who know which distribution they want can skip the step and simply move the the second part of the process: the copying of data to a storage device.

There is also a third option to select custom kernel, initrd and options values, but that is something that only Linux gurus will know how to use properly.

You select the drive type or USB device in the last step that you want to install the Linux distribution on.

The software program is compatible with all recent versions of Windows, various Linux distributions and Mac OS X systems. It is updated regularly to include the latest available distribution versions.