GeoSetter is a Digital Photo Software that aims to be a software for photographers and people interested in photos, and not one for picture collectors.

It is basically a photo software for editing geo data of image files. It is compatible with numerous image formats, including the popular jpeg format but also several camera raw formats like dng, crw, orf, nef, mrw, raw, and sr2.

The photo software reads existing geo data from images and displays them on a map powered by Google Maps which is integrated in the software.

Geo data can be edited or added if none is available. This can be done by entering coordinates and altitude manually, or with the help of Google Maps.

Google Maps can be used to locate the place the image was take, and that information can be added to the selected images. It is furthermore possible to synchronize geo data between images, for example between raw and jpg versions of the same image.

Note: GeoSetter was last updated back in 2011. This means that some of its functionality, Google Maps integration for instance, may not work properly anymore. There is little that one can do about that unfortunately. The project appears to be dead at this point in time.

Geo data can also be imported from geo data files and track files can be synchronized as well. The software can search for and display images that have been taken in a radius around a selected location.

The data can be exported to Google Earth and uploaded or synchronized with locr.

The application's interface uses panes to display date. There is a thumbnail preview pane for loaded images, a Google Maps pane, one that shows the selected image as a larger preview, and a file browser on top of that.

You can change the coordinates of the selected photo right then and there in the main interface, and modify some other data points such as the date the image was taken at.

GeoSetter is a powerful photo geo editor for Windows that reads many popular formats, supports syncing, and some automation features. 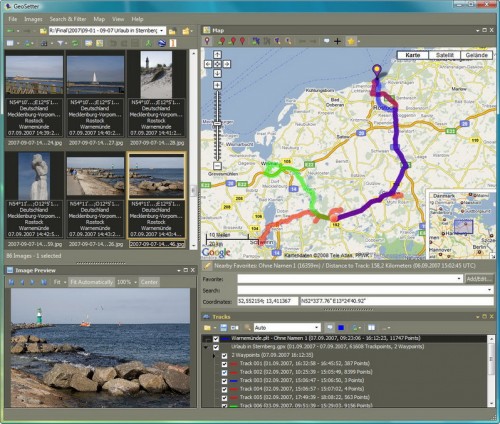