What do you do if all of your photos are currently hosted at Flickr but you want to have them in Picasa as well? What if you were notified that your image hosting site will cease its operations as in the case of AOL Pictures? That's only two scenarios where Migratr comes in handy. That tiny software program helps users migrate their photos between image hosting sites. A wide variety of image hosters are supported currently, among them so popular services such as Flickr, Picasa Web, SmugMug and AOL Pictures.

The process obviously requires authentication and that's the first step in the process. After picking one of the available image hosting sites the user has to enter his login credentials to for authentication purposes.

Once the credentials have been supplied Migratr begins to download all photos from the selected image host to the local computer. Another authentication is required to be able to export the photos again to the new image hosting site. 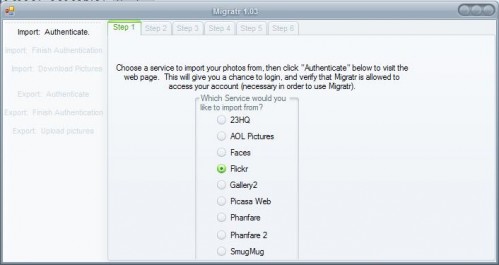 And thus the authentication process begins anew. After that it's just a matter of selecting the folder where the photos have been saved into and hitting the Start Export button. The software works pretty well and I did not experience any problems while using it.

It provides a nice way to backup your photos from those image hosting sites if you just complete the first three steps of the procedure.

Migratr requires the Windows .net framework 3.5 and should be running on pretty much every Windows NT compatible operating system. Tried and tested on Windows XP where it worked fine.

Update: Migratr has not been updated since 2009 which may indicate that it won't work anymore with most image and photo hosting sites it supports. Most services by now offer export options to export photos from the service.