Software virtualization is a clever security concept that puts certain applications and files in something that can be described as a virtual room where they cannot harm the underlying system. The benefits of this method are huge but unfortunately though not many users are using software virtualization solutions.

One small example. Downloading an infected file with your web browser or email client will have no negative impact on the core system. The virus will be executed in the virtual space and once that is purged, either manually or by logging off, it vanishes as if it never was executed in first place.

The software virtualization tool SafeSpace comes with a default set of applications that are always run in the sandbox and provides easy means to add additional applications. Besides that several directories, and their subdirectories, are automatically protected as well. This includes the Windows and Program Files directory among others. 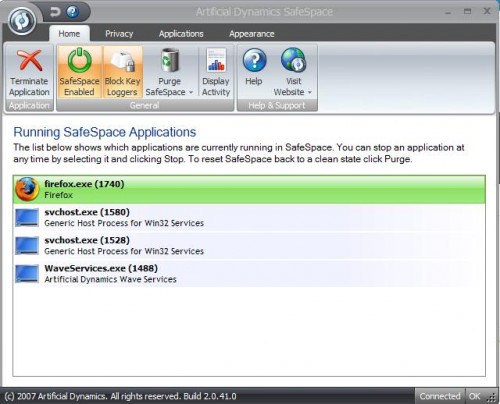 When a software gets launched that is listed in the application list of SafeSpace it is specifically marked with a red border. This is a visual sign for the user that the application is running in a virtual environment.

Any file that gets downloaded from a virtual application will also be run in the virtual environment when it is executed even if it is saved in the "real" part of the hard drive.

The software virtualization application comes with another handy feature, a tool to prevent keyloggers for applications in the virtual environment.

Installation was not a problem at all. Just execute it like any other software and restart the computer at the end. Windows XP users need the Microsoft .net Framework 2.0 if they want to run the software virtualization application.

SafeSpace will have created the sandbox after the restart and applications like Firefox or Internet Explorer will automatically run in it.