Imo.im offers a way to connect to various Instant Messengers using their website or a client that can be downloaded and is currently available for Windows. Supported are many popular Instant Messenger networks like MSN, Yahoo, Google Talk, AIM and ICQ.

The Imo.im team was rather busy since my last review of the service and has added two additional services. The first is the addition of Skype. The user can login using his Skype user data and will see a tab with his buddies and their status. He can chat with his buddies and even call them without difficulties. That feature is both available in the web client and the local software program that is downloaded to the computer.

The only restriction is currently that outbound calls are not supported. The second addition is that of MySypace IM. If I'm honest I did not even know that something like MySpace IM existed until I found the reference at the Imo.im website. 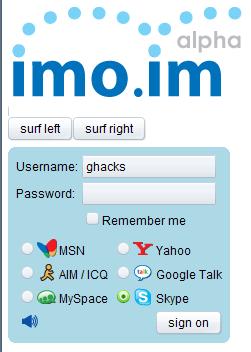 It looks like Skype with a MySpace plugin. Still, if anyone uses that he can also use that at Imo.im. I really like the Skype addition, mainly because Skype is the only service that I use regularly from the ones that are supported. Could be handy to use it to make a quick call or write a message to a friend.

The service is now not only available on the Internet, but also for various mobile devices including Apple's iPhone and iPad, as well as Android and BlackBerry devices.

Update 2: Please note that Imo.im has just announced that support for all third-party networks will be discontinued on March 3, 2014 as the company wants to concentrate on improving its own messaging service. Users can sign in to the site to download their chat history until that date.