The Giveaway of the Day website is offering some very nice software packages from time to time. Today's offer is A-Squared Anti-Malware in version 3.5 from Emsisoft which can be freely downloaded and installed from the website. The software developers can spread their software to a wide variety of users and gain some free marketing from websites like mine who write about it.

The offer is good for another day which means you have enough time to download and install the software package. The usual retail price for the software is $39.95.

A-Squared Anti-Malware tries to be the ultimate solution in the fight against malicious software, it protects the computer against all kinds like trojans, keyloggers and rootkits meaning it is more than just an antivirus software. 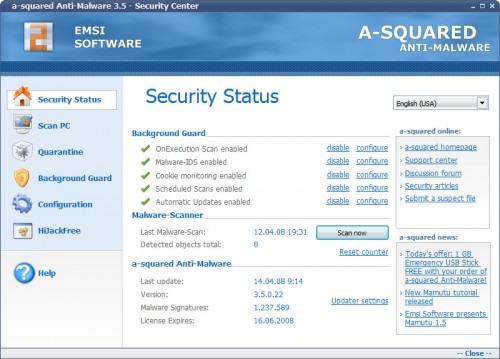 It's a great PC software especially for the price. It's especially of interest for those users who missed the A-Squared Anti-Malware offer the last time.

Update: The Giveaway of the Day offers only last for a day, and this one has expired. The program is now known as Emsisoft Anti-Malware and only available as a commercial program once again. It retails for $39.95, and a trial version seems to be available that you can download and run to test the application before you make a buying decision.

The program seems to feature two scanners instead of just one, which seems to work quite well judging from the latest reviews the program has received.

Update 2: The program is still available as a freeware, but it is somewhat hidden on the page. The trial version that you can download reverts to a freeware after 30 days of trying out the program on your system. It is limited however in comparison to the commercial version, as it does not provide you with real-time protection against threats you encounter on the Internet.