I stumbled on to a service for managing multiple twitter accounts and at first I thought it was going to be one of those second rate sites, I was put off a bit by the 16x16 logo I saw on the referring page. However when I got to Matt I was instantly pulled in.This is a site with a truly unique and fun style, which allows you to very effectively manage a whole load of Twitter accounts while your at it.

You can simply add accounts while Gobo the account manager introduces himself, and once that's done you can send tweets by simply typing out your tweet and selecting which account you want to submit it to. The cool thing is that you can send to multiple accounts, so you won't have to type or copy paste messages multiple times.

The only negative thingI have found during my tweeting is that my messages tend to be delayed by about 3 minutes. This is not an error, you can see your tweet's status being queued, I guess they just have too much traffic. I can live with that 3 minutes though, and although I don't have multiple accounts yet, I will still use Matt for Twittering because of its design.

Update: The service is no longer available and redirects to another site that you can't make use of to manage multiple Twitter accounts with ease. We have removed the link from the article as a consequence

A viable alternative that you may want to try is Splitweet which enables you to manage multiple Twitter accounts as well. 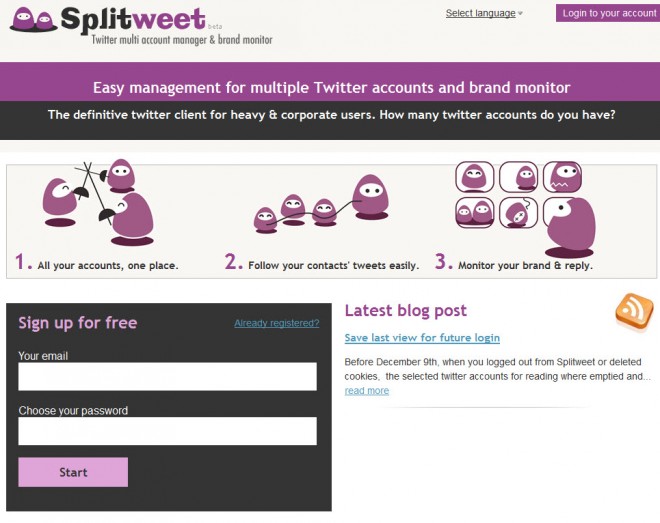 The latest blog post dates back to 2010 which may be an indicator that the developers may have abandoned the project. Another option is TwitIQ which provides you with a similar feature set.

I'm a 24 year old guy writing blogs, playing music, singing, playing bowling, reading, doing a bit of handcraft, working away on a number of projects, the list just seems to grow and grow, and that's the way I like it :)
View all posts by Daniel Pataki →
Previous Post: « Dig Digsby, You Have Good Reason to
Next Post: Web Based Time Management and Analytic Application »