Paste Text As An URL

With the rise of Instant Messengers and their web counterparts like Twitter came the problem that users who wanted to post text paragraphs had to divide them up because of the text size limitations of the clients. To be honest I'm not sure why there is such a limitation in first place but maybe I'm to old fashioned to grasp the use of such services anyway.

One solution that works surprisingly well is to use a service that creates an url pointing to the text that the user wanted to post. It's an additional step for the recipients though who have to open the url to read the message but it's a practical solution, something like Tiny URL for texts, Tiny Texts so to speak.

The one service that I can recommend the most is Text Snip. The advantage of Text Snip is that it can display the text in various forms including CSS or HTML source code, plain text and several other programming languages. 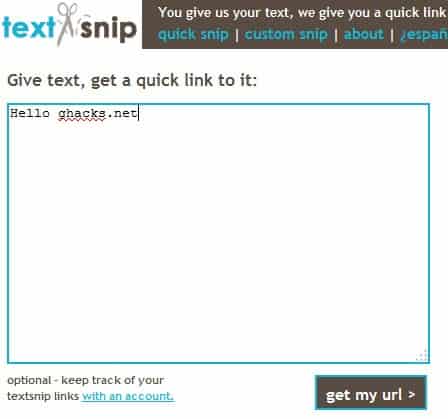 The service offers two main options to create an URL that points to the text: Quick and Custom Snip. The difference is the URL that is created in the end. Custom Snip provides several URL possibilities while Quick Snip creates one without giving the user the choice. The latter is therefore faster while the former gives you more control over the process.

The service is easy to use and does not require an account at all, uncomplicated and nice. Users can create an account if they like which has the effect that they can keep track of the texts that they converted into URLs. Keep in mind that everything you snip may be publicly accessible as there is no option to password protect the text that you paste into the form on the website.

Martin Brinkmann is a journalist from Germany who founded Ghacks Technology News Back in 2005. He is passionate about all things tech and knows the Internet and computers like the back of his hand. You can follow Martin on Facebook or Twitter
View all posts by Martin Brinkmann →
Previous Post: « IP Spotting
Next Post: List of problems solved by MacGyver »