It is only natural that some users use their Apple iPhone or iPod Touch as a portable device that stores files. The disk space of Apple devices are definitely large enough to provide room for some additional files. Not necessarily pictures, music or other multimedia files but maybe documents or executable files that are essential to the user.

Disk Aid can transfer files between a computer running Windows or Mac OSX and an iPhone or iPod Touch. My older iPod Nano was not recognized by the software which means that it is most likely only working with the two devices mentioned above. A supported device is recognized automatically by the application. It reminds the user to install iTunes if that software is not installed on the local computer.

The application supported the usual file operations like copying files from and to the iPhone or iPod Touch, creating folders, deleting files, renaming and even copying folders with their contents. 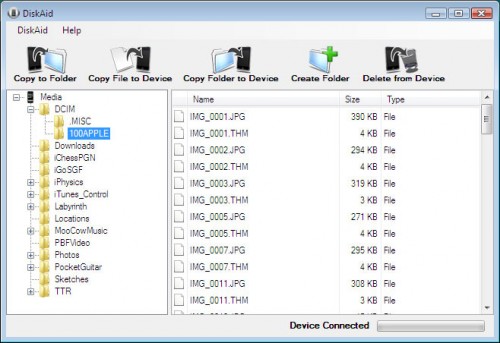 No jailbreak is needed to use Disk Aid and the supported firmwares are 1.1.1 to 1.1.4. Great software if you have an iPhone or iPod Touch.

Update: Note that there is a free and paid version of DiskAid available. The free version lets you do the following:

The registered version that is available for a price adds the following set of features:

The developers are currently preparing to release DiskAid 6. To use any version of the program do the following in the right order. Start the program after you have downloaded and installed it on your computer. When it is started, connect your Apple device using the USB cable. It should be automatically recognized by the application so that you can start the file transfers.