Auslogics Registry Defrag reduces the size of the Registry by defragmenting it which has the effect that the Registry will take up less memory when Windows is running which mainly improves the boot time of the operating system as it takes less time to load a smaller Registry.

The tool scans the Windows Registry initially and displays a report of the fragmentation level of the Registry afterwards.

It is recommended by the developer to close all open applications to maximize the effectiveness of the Registry scan.

Once started, the mouse cannot be moved outside of the program's interface and even the usual ALT TAB or Windows keys are disabled. The user has the option to quit the application at any time or proceed with the defragmentation which requires a system restart. 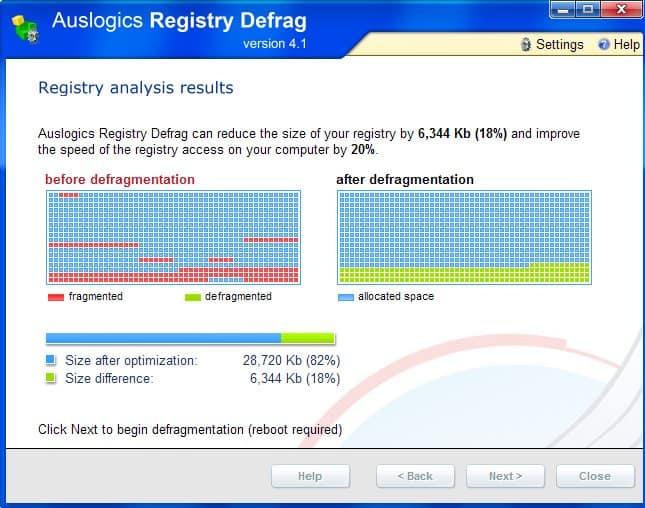 As you can see in the screenshot above the tool was able to cut the size of the Registry on a test system by more than six Megabytes from 34 to 28 Megabytes which is a difference of 18%. It cut down the machine's boot time by two seconds.

Update: Recent versions of the Auslogics Registry Defrag program include an offer to install the company's BoostSpeed software and third-party offers. This is not required to run the Registry program and I'd suggest you uncheck the options during installation to block the installation by selecting custom install and declining any offer displayed by the program during installation.

The program optimizes the Windows Registry in three steps.

The program creates a restore point before defragmentation by default. The analysis should not take longer than a minute, and you will not only receive information about the size the Registry can be reduced by but also by the speed gain of the operation.