It may be a little late to be discussing leaks of Windows Longhorn seeing as the project was reset over 4 years ago and we are now looking at Windows 7 on the horizon.

However I just discovered a very interesting blog today called UX.Unleaked which has been providing regular dialogs over the past month on the many builds and developments of the codenamed Windows Longhorn.

I have no idea what the credentials of the author are, but he has a lot of knowledge and insight into the history and development process of Microsoft. In fact he has a number of previously unseen builds on his blog and offers an in-depth commentary.

Longhorn was to contain every revolutionary technology Microsoft had envisioned for the next decade including the much spoken of WinFX. Itâ€™s been well documented that eventually Longhorn collapsed under itâ€™s complexity and Vista was created instead using Server 2003 as a base almost completely from scratch in just 2 years. 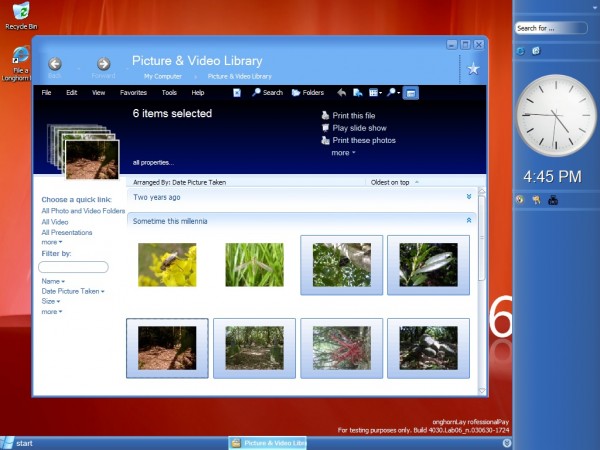 It was a costly management mistake that has seen a dive in public perceptions and an ongoing struggle for Microsoft to hold a position of similar influence as it did at the beginning of the decade.

Although it was never completed Longhorn was not discarded. Many of the features and code inspired various Vista technologies and have been incorporated into Server 2008 and the upcoming Windows 7.

Looking through the various past builds of Longhorn can give an insight into both the development process and possibly what we can expect from future Microsoft operating systems.

The blog, while still available at its address, has not been updated since 2008, and it is likely that the author stopped adding content to it after all the content that he wanted to publish had been posted on the blog.

Here is a list of milestones and information that are available on the site: