I read about Mbbit when it was first introduced on several websites but never checked it out until now because I did not find a web based IRC client that appealing. I had some time at hand today and decided to check out some of the saved bookmarks of the previous weeks and one was pointing to Mibbit. Mibbit provides a web interface for IRC, the Internet Relay Chat. I used to be very active on several IRC channels a long time ago. Back then it was only possible to use a software like Mirc to connect to IRC.

The benefit of a web client is obviously that all the installation and configuration of the IRC client is not necessary. It should also protect the user from all those worms that are spreading on the various IRC networks. Mibbit offers a search over all networks which no client provided back then when I was using IRC. A list displays all the channels sorted from most populated to least that contain the keywords entered in the search.

A click on the result tries to load the IRC channel in a new tab. Mibbit is offering tabbed channels which means that it is possible to connect to more than one channel at a time which is definitely a must on IRC. The layout looks similar to software clients, the page contains a message pane, a user pane and one pane to write messages. 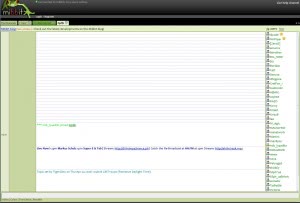 Interaction with other users is rather limit. It is possible to send them a private message, do a whoise or ignore them. I was not able to find out any details about data transfers and think that those are not supported.

Mibbit is a good alternative to IRC clients if you are on IRC to chat, and only to chat. If you are an admin or voiced user or use IRC for file sharing, trading or other stuff then you are still better of using a software client. This is however a great way to connect to IRC with devices that do not have their own IRC software, thinking about video game systems like the Wii, handhelds and mobile phones.