You can enter program names in the Windows run box and some of the applicationsmay recognized and executed. This does not work with all your applications however and maybe you'd like to find out how you can add new run shortcuts to the database so that you can run those programs from the run box as well by simply entering the name that you have assigned to a program.

The application that I recommend for this operation is called Short Run. When executed it lists all currently available shortcuts even those of applications that have been uninstalled from the system. As you can see in the screenshot below entries pointing to uninstalled applications are represented with a exclamation marks. 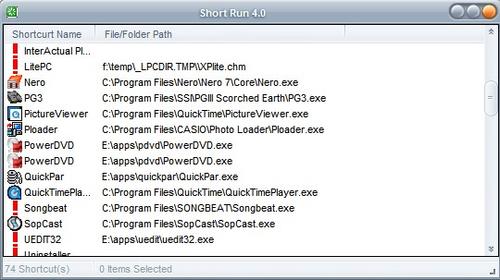 Far more interesting than removing invalid shortcuts is to add new shortcuts. Pressing CTRL A will open the menu where new shortcuts can be added. The Shortcut Name will be the name that you can enter in the run box after adding the shortcut. The file / folder form field contains the path to the file or folder that you want to open and the Optional Parameters field takes any optional program parameters.

Existing shortcuts can be edited as well. If you think that the shortcut name Thunderbird is to long you can edit it to "t", "mail" or whatever else you like. The changes take effect immediately. Oh, and you can bring the Run Box to the front by pressing [Windows R].

Short Run is definitely a handy program, especially for users who often use the run box in Windows to start applications. If you have discovered that your favorite software is not picked up automatically when you enter its name, you may want to use this program to remedy the situation.