I wrote a really long review on my blog recently on Flock, the community browser and thought I'd share some of my findings with you guys. Flock is basically a Mozilla based browser, much like the new Netscape was, but it offers a lot more, especially in terms of social site integration.

It recognizes a lot of social sites like Youtube, Facebook, Del.icio.us and integrates these sites, allowing you to navigate them using the browser interface. A great example of this is the Flock toolbar, which has a small icon for people. By default this shows you a sidebar with your registered social sites, along with the people associated with them. If you have new friend requests, the icon turns red, giving you a cool visual indication.

Flock also supports bookmarking to your favorite sites automatically, it has an awesome web clipboard that recognizes links, pics and text, a great RSS reader, much like Google Reader and it is riddled with small but handy features everywhere. All Firefox extensions have worked for me so far, but some people do report that a large number of extensions slow Flock down more. 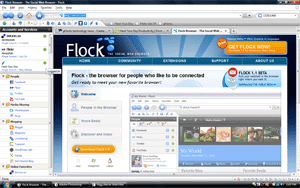 There is a full blog editor in there which works fine for simpler entries and for most bloggers, but for the pros it won't be enough. It is able to post, but I couldn't get it to select categories for me, only tags. If you have a simple private blog though it will work great.

All in all I favor Flock over Firefox, now that I am using a lot of these social sites. A Flock rep told me that once Firefox 3 is out, they will also change their version and Flock will be built on the new Firefox, so that's something to look forward to. On the negative side there are some more sites that could be built in like Digg for example, which is a mystery why it has been left out. I see a lot of potential here just waiting to be developed, I do hope it will be!