Most flat screen monitors these days come in sizes of 19'', 22'' and 24'' with a 16:9 ratio. The Samsung Syncmaster 2263DX LCD monitor is different. It does look like a normal 22" flat screen monitor if it were not for the little 7-inch monitor that could be added on top or at a side of it. It's a rather bold experiment in times where dual monitor setups become affordable to almost anyone.

The 7-inch monitor can be attached to the 22" monitor by plug and play, just plug it in and you are ready to go. The main question however is who would shell out $500 for a 22" monitor with the little satellite monitor if he could purchase two 22" from Samsung (or any other monitor manufacturer) for just a $100 extra.

You can only display those applications on that monitor that do not require much space. Many would suggest Photoshop palettes or the like but I think it could be perfect for Instant Messaging, Email, Chats and even Stats of some sort. It maybe is an alternative for workplaces with not enough space for two monitors of the same size. 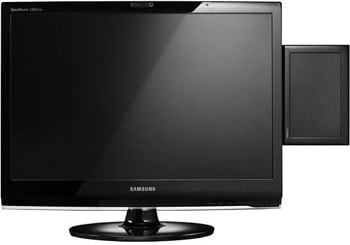 What do you think, could this be a new trend or is it just a geeky plaything that will not survive for long on the market ?

Martin Brinkmann is a journalist from Germany who founded Ghacks Technology News Back in 2005. He is passionate about all things tech and knows the Internet and computers like the back of his hand. You can follow Martin on Facebook or Twitter
View all posts by Martin Brinkmann →
Previous Post: « Hard Disk Low Level Format
Next Post: Goodbye BIOS Here Comes UEFI »