Use TUGZip to View Archived Files

Update: TUGZip has not been updated since 2008. While it still works for the files it supports,it is generally recommended to use a program that is updated regularly and supports new file types that TUGZip does not support. A great alternative is Bandizip for instance, a free program that supports all major archive formats and a lot more. End

There are plenty of file archiving utilities available but only a few of them are actually really good. So far, the better options were programs like 7Zip and Izarc. However, I’ve recently discovered a fairly new utility that promises to be as good or better than the ones mentioned above.

TUGZip is a freeware archiving utility for Windows. It can open common formats like zip, rar, 7zip, etc. as well as obscure ones like ace, lib, tbz, etc. In addition to that, it is also supporting disc image formats including the Nero format nrg, ISO, BIN and IMG.

You can use it to extract archives quickly, for instance through Windows shell integration but also by using its multi-extraction feature to extract several archives that it supports in one batch.

On the writing side, it can create archives using most common formats which should be more than enough for most users. Users have the option of using any one of 6 different encryption formats to create archives and self-extracting formats are also supported by it. 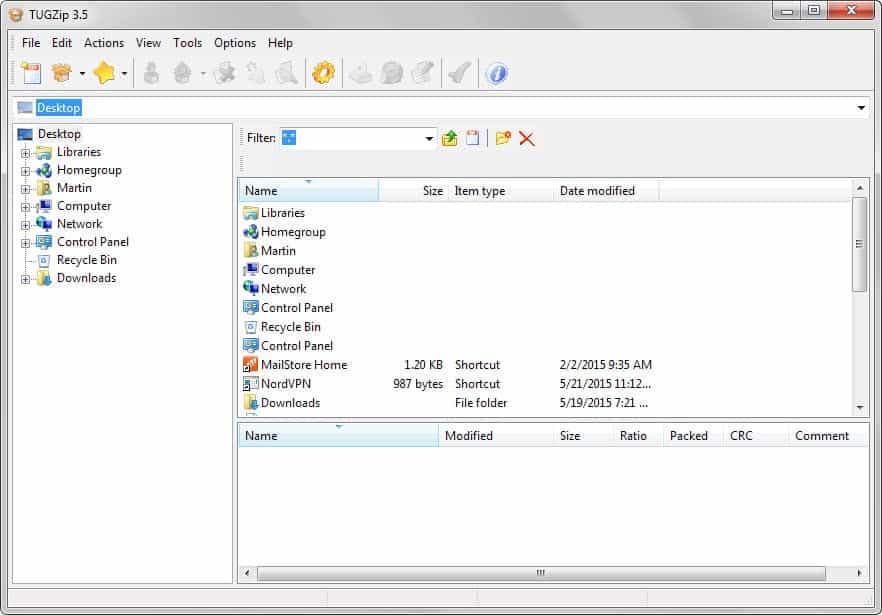 TUGZip is pretty easy to us; it has a simple interface that offers quick access to all program features. The software supports three different interfaces that you can switch between using the view menu. These determine what is displayed in the main interface area, for instance if sidebar folder browser is displayed there or if the interface is limited to a single large pane.

All supported archive formats can be mapped to the program on start so that they are opened automatically by it when clicked on in Windows.

The creation of archives is simple as well. Just select files and folders in TUGZip's interface that you want to add to an archive, right-click them and select the appropriate option, or use the create new archive button to get started instead.