Defrag Hard Drives only when they are fragmented - gHacks Tech News
ghacks.net

Defrag Hard Drives only when they are fragmented

If a drive has no fragmentation whatsoever, or only slight fragmentation that does not impact performance by a lot, then it does not really make sense to run a defrag on it. The defrag tool that ships with Windows can be used to check the fragmentation level of a hard drive, and we are going to use this functionality to create a script that runs defrag only when the hard drive is fragmented.

That's useful to determine a drive's fragmentation status, but won't help you right away as you need to combine the information somehow with the running of the tool so that defrag.exe is only run when necessary. 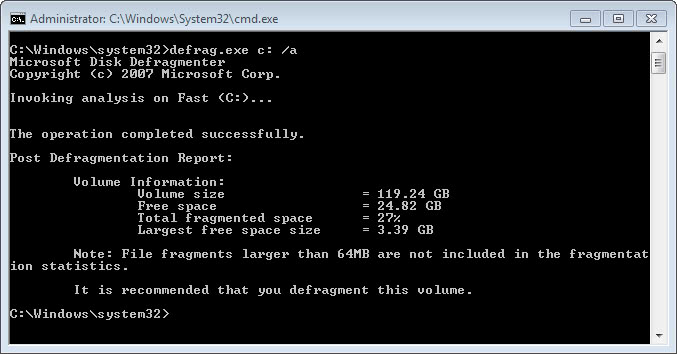 A script by Ramesh Srinivasan uses the report to determine if a hard drive should be defragmented. The Visual Basic script can be added to the Windows scheduler or simply executed during system startup, shutdown, or by double-clicking the file at any time while the system is running.

I copied the file to a text file and zipped it already. You can download the script here or visit the website above where the script is displayed in text form (Update: article no longer available).

The script enumerates all fixed drives connected to the system. To add the script to the Windows Task Scheduler, download it or create it from scratch if you want, and do the following afterwards.

When it is time to execute the script, all drives specified in it will be checked for their fragmentation status. If the drives are fragmented, a defrag operation is run to resolve this.

Article Name
Defrag Hard Drives only when they are fragmented
Description
Run a defragmentation software only when a hard drive is fragmented using a simple script and tools that ship with the Windows operating system.
Author
Martin Brinkmann
Publisher
Ghacks Technology News
Logo