Regshot is a free program for the Windows operating system that enables you to compare two snapshots of the Windows Registry and directories.

Taking Windows Registry snapshots can help you analyze changes that have been made to the system during a set period of time. The time being of course the days, hours or minutes between the first and second snapshot.

Regshot is a software that enables you to take Windows Registry and folder snapshots, and compare two of the snapshots that have been crated with each other to find out what changed in the time between the creation of the first and second snapshot.

This can be useful to find out exactly what a software installer changed on a system for instance, or if files in a folder of interest were modified. 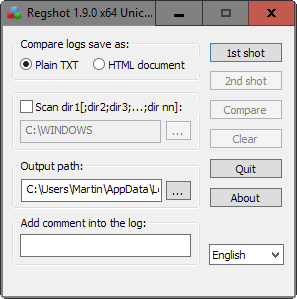 Regshot is a portable program that comes as a 32-bit and 64-bit version both as ANSI and Unicode versions.

The interface is functional and provides you with the following configuration options:

Saving enables you to load it at a later point in time. This can be useful if you want access to a default snapshot, for instance directly after the installation of the Windows operating system or the most recent update.

Another interest application for Regshot is to compare how well a program's uninstaller removes files and Registry information that were added during the software's installation. If the program recorded 1000 changes in total during the installation of a program on the machine, it should match that number during uninstallation and any variation of it may indicate leftover data.

If you don't save the snapshots, they will be lost when you close the program.

The same options are provided for the second snapshot. Once you have created or loaded two snapshots in Regshot, you may hit the compare button to have the program create a compare log file that highlights all differences in the two snapshot files. 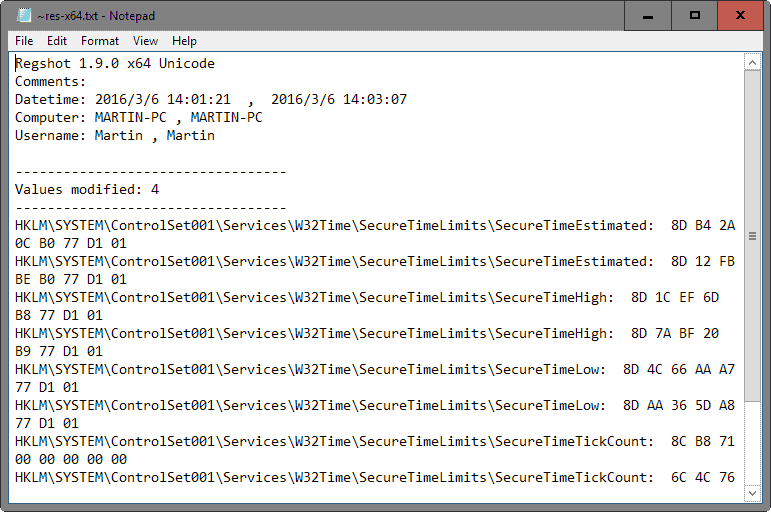 The log file displays the date and time of both snapshots at the top, the computer name, and the name of the user used to run the program.

It then highlights the following information:

The comparison file can be extremely large depending on when the two snapshots were created. It is therefore usually best to make sure the time between both snapshots is as short as possible to prevent the log file from filling with unrelated data.

Also, you may need to load the comparison file in a compatible program, as the size of it may be too large for it to be opened in the default text editor Notepad.

Regshot is a mighty useful program for Windows, not only to monitor the installation of software on the system, but also changes during Windows updates or simply monitoring what a program does while it is running.

We have reviewed quite a few Regshot alternatives in the past years. Here is a quick selection of programs that offer similar functionality:

Previous Post: « One Hotkey Software to rule them all
Next Post: Updatestar: check if Software Updates are available »