Windows in the loop

I thought it was not possible to to improve CoolSwitch but I was obviously wrong. Xilokit came out with another interesting concept for the Windows operating system. It's a freeware application called Deskloops which offers an refreshing idea on how to handle windows in Windows.

It takes all your open windows and makes an endless tape out of them. When you need to switch to another window, instead of using Alt+Tab you simply move your cursor to the edge of the screen. Depending on the position on the tape another windows scrolls into your view and moreover, another little loop appears in the center of the screen so that you have a better control of all windows on the tape. The windows are blurred when they move but they get into focus after reaching your destination. 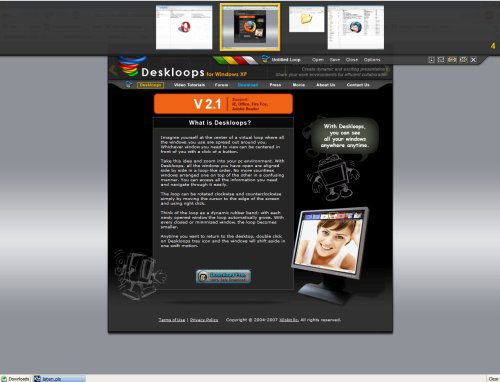 The last feature you get with this utility is an overview bar on the top of the screen with thumbnails and count of all open windows. You can click any thumbnail to activate the loop and bring that window to the front to work with it. You can even save the active tape of windows as a session and activate it later again by loading it. I was really surprised by the number of options available, including loop speed, transparency, arrangement and more. Deskloops is a nice and powerful replacement of the standard CoolSwitch.

Working with this concept is a little bit strange at the beginning. I had to create a screenshot in Gimp using copy paste and I had to switch between the main Gimp window and the screenshot window several times to finish the process and save the image.

Update: Please note that Deskloops is no longer available. The developer website returns a parked domain full of ads, and we have removed the link as a consequence.

We have uploaded the latest release version of Deskloops, version 2.0.1, to our own server from where you can download it. Note that we do not offer support for the program. Click on the following link to download it: [Download not found]

Previous Post: « Defrag all Hard drives at once in Windows
Next Post: « Use Driver Grabber to copy drivers in Windows