Anonymous on the Internet with Relakks - gHacks Tech News
ghacks.net

Anonymous on the Internet with Relakks

Relakks offers an easy and anonymous way to be on the Internet by tunneling all traffic through their service which is based in Sweden. This effectively means that your home IP is not revealed to websites, p2p clients and servers and all other computers and servers that you are connecting to. IT is a vpn - Virtual Private Network - service that is great if you want to protect your IP and information from third party sites and services you connect to.

The traffic is encrypted as well which makes it unlikely that someone is able to spy on it including your ISP or another party connected to the network or a public wireless network. I have been writing about Relakks before and they had some serious troubles with their service at the beginning which turned off many users who tried the service initially.

This has changed to the better. I was able to connect and use the service whenever I wanted in the last weeks and had no troubles whatsoever with slow speeds or unreachable hosts. The connection is stable and fast enough for everyones needs. I was able to surf, use emule to try the p2p capabilities, listen to Internet radio and download from the Usenet at the same time without problems. 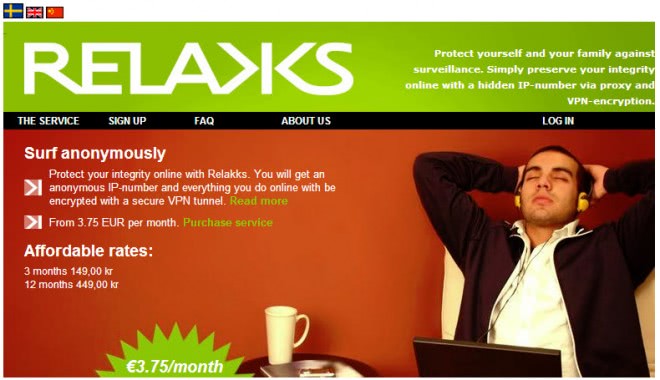 The maximum speeds are a little bit lower than what I used to get without Relakks. Everyone has to make the decision for himself if the extra bit of security and privacy is worth the slower speed. Slow meant for instance that my Usenet downloads were capped at about 8-10 Mbit instead of the usual 16 Mbit.

Not a big problem for me though. It has to be noted that Relakks is not a free service. It is possible to either purchase a monthly account for 5 Euro or a yearly for 50 Euro. I'm currently trying the monthly account and will switch to the yearly one once it expires.