Spyware Terminator assists you in setting up the software after installation with the help of a setup assistant. You setup automatic updates, the protection level - offering beginner, advanced, expert and no protection levels - the integration of the free antivirus software ClamAV and finally whether you would like to send spyware information to a central server. Last but not least you can schedule scans and perform a fast system scan. 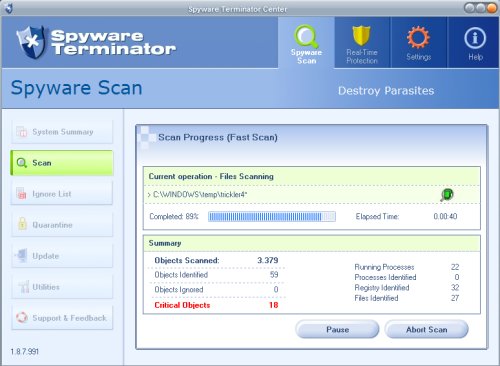 You may select some or all threats and either move them to quarantine or delete / uninstall them right away. The spyware removal itself is recommending to use the uninstallation routine (if available) for the spyware that you want to remove. It should be obvious that many spyware processes do not offer uninstallation routines and it was not a problem for Spyware Terminator to remove all of the threats in that category.

It could be tricky to receive additional information about the objects listed in Spyware Terminator. There is no obvious way to find out more about "Nwiz" for example from within the program which means that you have to perform a search on the Internet to be sure why this is considered safe for instance. There is however a way to contact the support team which apparently helps if you have troubles identifying a certain object.

Another way would be to use the forum on the official website which offers a subforum for all questions and problems in regards to removing threats.

The fast scan did not scan all files on my system and I decided to take a look at the available scan options to perform a full scan of my system. Next to the fast scan you can perform a full scan and a custom scan, both offering several options to optimize the scan. The Full Spyware Scan gives you the option to perform a system scan, a registry scan, a files scan or a deep files scan while the custom scan lets you choose a drive that should be scanned.

Let us take a look at the real time protection which is one of the main features of the program. The protection is divided into three different areas, namely Application Guard, System Guard and Internet Guard. All three guards can protect different aspects of your system. The System Guard for instance may protect your hosts file which is often used by spyware and attackers to redirect you to fake websites.

The Internet Guard protects your system against Toolbars and Browser Helper Objects among other things which is indeed very useful if you surf the web with Microsoft Internet Explorer.

Spyware Terminator is a nice program that is in my opinion at least on the same level as Spybot Search and Destroy and Ad-Aware. Ad-Aware for instance does not offer realtime protection in the free personal version which is a big plus of Spyware Terminator.

Most inexperienced users should activate the realtime protection feature as it improves their security when they are using the computer as threats can be detected in real-time when they try to run on the system.

Update: Spyware Terminator is now offered as a free and paid version. The free version does not offer antivirus protection, advanced security tools and high priority updates. All other features of the paid version are however included in the free version as well.

In case you are wondering, the paid version uses F-Prot antivirus.