How to write European Special Characters

It is not happening that often that you have to write accented characters or umlauts but it sometimes happens, especially if you are addressing someone who has such a character in the name or if you are writing down in a foreign language that makes use of them.

Maybe you want to write a name like Søren or a unique German street name such as Bachstraße. If you never had to type those characters before you may wonder how it is possible to write them down using your keyboard as there are no keys on it that let you do so.

One way to solve this problem is to use the Firefox extension Zombiekeys which adds exactly this functionality to Firefox. You have access to many, not sure if those are all, special characters of European languages.

Those include diacritics and ligatures. Unicode and Windows-1252 characters are supported as well. The key combinations have been directly taken from Microsoft Office which means that if you use them there, you will be able to use them in Firefox immediately.

Update: The extension has been updated regularly ever since our first initial review of it. The developer has added even more characters to the application which you can type with a short key combination. It is now also officially hosted on the Mozilla Add-ons repository so that you can download and install it from there.

I'd like to point out two additional options that you have to add special characters to text that you write. 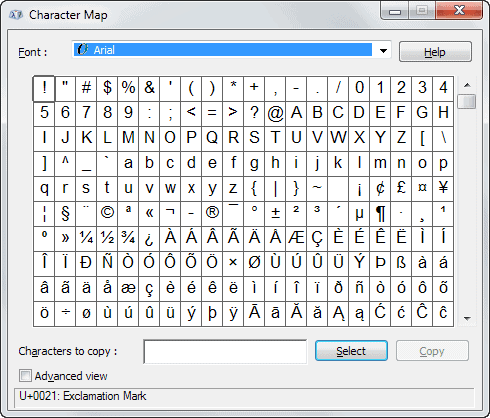 The Windows operating system comes with a Character Map application that you can start. To open it, press the Windows key on your keyboard and type character into the form that opens up. Select Character Map from the results to start the program.

Just select the character from the list of available ones and then copy to copy it to the Clipboard. You can then paste it from there into any application running on the system.

The Advanced view mode opens a search that you can use to find specific characters. A search for a for example displays all variants of that character so that you may be able to pick the one you are looking for more easily from the list of characters.

If you have memorized your Ascii codes or at least know the ones you use regularly, you can type them directly into any application supporting that. This includes holding down the ALT-key on the keyboard and typing a four digit combination using the numpad.

You find a list of keyboard shortcuts here that you can use for that.