I'm usually not using iTunes because I think the software is slow and overloaded just like Windows Media Player (which I do not use as well). If I want to play music I use Winamp and to transfer songs to and from my iPod I use Floola.

I still have iTunes installed but as I said it is only used seldomly, usually only when I want to test a new feature. To be honest, I did not even knew that there were visualizations for iTunes available. You can think of them like the ones on Winamp for instance. I found this amazing visualization for iTunes and decided to write an article about it. I think it would be best to walk you through the installation and activation although it is nothing complicated. Download and install Magnetosphere and start iTunes afterwards. 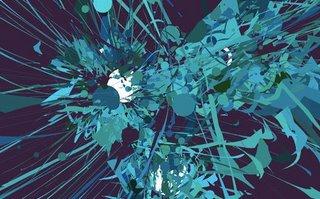 Click on the Visualization tab and select Magnetosphere from the list. Last thing to do is to start either a song or playlist and click on Turn Visualizer on. I suggest full screen mode which looks awesome instead of windowed mode.

The developers did not include a lot of information about customizing the plugin. I was able to figure out the following. Pressing the A key adds one hundred particles to the visualization while pressing S reduces the amount by one hundred. Please be cautious about this. If you add to many particles your computer could stop responding as it requires quite the processing power.

Visualizations change with every new song automatically. They do differ a lot which makes the visualizer more worthwhile. I pretty much like the idea to run Magnetosphere in full screen mode with music from iTunes playing in the background.

Do you use visualizations for iTunes or Winamp? If so, let me know about them, I would like to take a look at them. The only question that remains to me is this:, how do I bring this visualization to my iPod Nano?

Update: Magnetosphere has been integrated into Apple's iTunes software so that it is no longer available as a standalone download. Check out the following video that demonstrates how the visualizer looks like in moving pictures.