I should probably create a new category called Gadgets for Geeks or something like that for this Home Planetarium. It is a Japanese toy created by Segatoys.

The device projects the night sky on the ceiling or a wall in your home. I know it is hard to imagine how this would look like but I guarantee you that it looks incredible if your room is darkened.

Segatoys actually created several versions of the Home Planetarium which differ in functionality and price.

The premium model called Segatoys HomeStar Pro 21st Century Home Planetarium has a brighter LED for a clearer picture and is able to rotate the night sky automatically. Last but not least it supports shooting stars which the other versions do not. 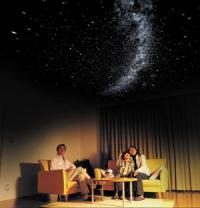 Update: Sega in the meantime has released a new top of the line model. The Segatoys Homestar Extra Home Planetarium for a price of $1049.99 is bigger than the other models but still compact enough to fit into any room you place it into. It ships with a remote control, a lens cap and three original star plates. The remote can be used to control the time and rotation speed of the home planetarium which boosts a higher resolutions than previous models.

As with all models, packaging and instruction manuals are in Japanese only. The system has been designed however with ease of use in mind, which means that non-Japanese speaking users should have no issues setting it up and operating it.

The other models mentioned above have been improved as well and you find improved versions of the models now on the shop's website.

Previous Post: « Which Star Wars Personality are you?
Next Post: « Never Publish your Phone Number on the Internet