Paint is a real image editor

I would not have stumbled over those creations were it not for artists who uploaded their creations to YouTube where I found them listed among many other interesting ones.

Thankfully they do exist and I was able to select some handpicked images that have been created with the Microsoft Paint image editor.

Time Lapse is used which basically speeds up the video by a certain factor of time. This is great as it reduces the overall playing time by a lot. Instead of having to watch an artist work on a painting for hours, you can see the whole process in a couple of minutes. 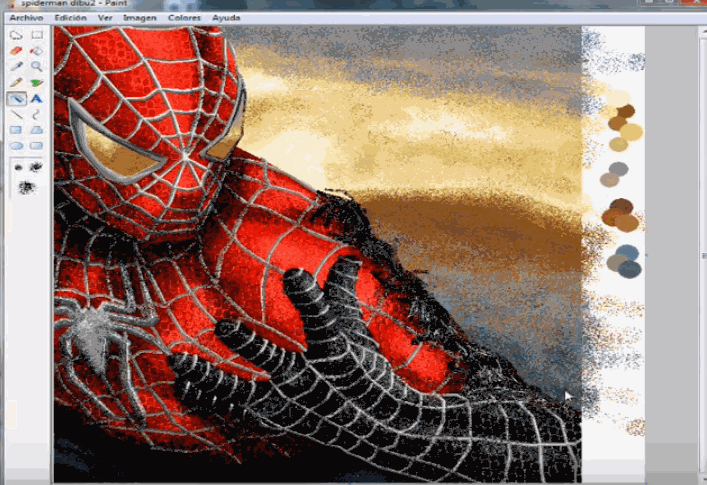 So, what can you expect to see? Image editing at its finest: Witness how one artists creates the Mona Lisa in Microsoft Paint for instance. Others paint beautiful cars, John Locke from Lost, a simple face and a lowrider. Still think that MS Paint is no real image editor?

Update: Three of the five videos that I have posted here in this article in 2007 have been removed from YouTube in the meantime due to copyright claims. Thankfully though it was not too hard to find new videos that show some impressive MS Paint skills.

First up is Spiderman in Paint which looks just incredible. Watch the 4:38 minutes to see how a great looking Spiderman appears out of thin air. Better than the original? Probably.

The second new video is a rather intriguing Paint creation that took the author four years to complete. It is a large image full of comic characters, buildings and all that good stuff. While it may not be as impressive as the Spiderman above on first glance, it is certainly an impressive work of art.

Last but not least we have an Audi A5 that is been drawn using MS Paint. The video has a playtime of seven minutes and up from the very first seconds of the video you start to realize that this car will look incredible in the end.