Most versions of Windows Vista ship with Windows Aero, a set of interface features for Windows. It offers, among other things, a new feature called Flip 3D to Windows Vista users that enables them to organize windows in a 3D environment.

The main advantage of this method is that it is possible to display more content on the same amount of desktop space, as you can rotate windows into three dimensional space (virtual but nerveless) to do so.

The program that offers a similar functionality for older Windows versions is called Madotate. It adds another icon to every window next to the icons on the top right corner. If the new icon is clicked on the window will be changed from 2d into 3d mode which moves the window into the third dimension so to speak so that it uses less space on the desktop. While this impacts the visibility a bit, it lets you keep more windows open on the desktop at the same time.

Every window has a short tab that displays the title of the window. Left-clicking a 3D window changes it again from 3d into 2D mode, you can move it around by keeping the left mouse button pressed. A right-click on a window provides you with controls to change the point of view of it. You can move the point of view sideways or upwards and downwards so that it uses less or more space on the desktop. 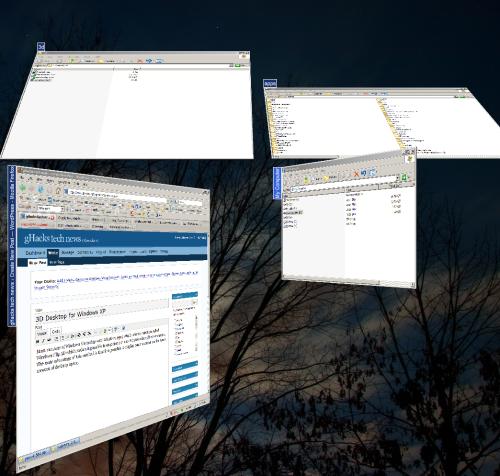 The most important aspect of the application is that it uses only a few megabytes of system memory will the feature in Windows Vista requires a lot.

Update: I have just tried the program on a 64-bit version of Windows 7 Professional and it worked just like it did under Windows XP. That's remarkable for a program that has not been updated since 2004. To use the portable program simply run it after you have downloaded and unpacked it on your system. You will notice the new icon next to the minimize, maximize and close buttons on each window which enables you to use the program's functionality on any window on your system.